Here's Jonathan with Joe O'Connor (a.k.a. "Mr. O"), his awesome Educational Assistant, on the last day of school.  We were happy to find out today that Mr. O will be back to Rideau Public School in September!
Posted by Jeannie at 5:40 PM No comments:

This evening was Grade 8 Graduation at Calvin Park Public School.  Here's Allison in her new dress.

Getting ready to go.

With Grandma and Dad.

With Mom and Dad.

Allison received the Burgess-Davidson Literacy Award for the student in the Challenge program who demonstrated excellence in writing.  We were very surprised and proud when her name was announced, although her teacher had already told her she might receive an award.  We're very proud of Allison:  she's a great student, a sweet girl, and a wonderful daughter.

Jonathan headed for the "yellow-blue-red" as usual today when we arrived at school.  His former classmate Sam came over and took a few shots with the small yellow ball Jonathan had brought -- but he missed every shot.  Each time, Jonathan responded by saying, "So close!"  Sam laughed and said, "He says I suck."  I told Sam, "No, he's saying 'So close' -- Jonathan would never say you suck."

Afterward I got thinking about when Jonathan was in kindergarten and one of his classmates told her mom, "Jonathan is never mean."  To me that is a pretty good depiction of character, to have someone say that you are never mean or that you would never insult someone.  I know when I was nine, people were sometimes mean to me -- and I was sometimes mean to other people.  I remember refusing to hold a certain girl's hand when we were playing a game because she was very fat.  I still remember the look my teacher gave me.  She didn't have to say a word; the expression on her face said it all: "BUSTED."

I don't think that (most of the time) we should condemn ourselves for what we did when we were nine.  We're far more responsible for the things we do when we're nineteen, or twenty-nine, or ninety-nine, and our meannesses at those ages are likely a lot more serious.  But the thing is with Jonathan:  he will probably still not be mean when he is nineteen, or twenty-nine, or whatever.  He doesn't have that tendency most of us have (or develop) that makes us judge people according to their skills, or their weight, or their appearance, or their status.  Everyone in his world is a friend -- and not just the garbage truck guys, either.  And if that's how you see the world, how can you be mean?

The weather was gorgeous today:  sunny, breezy, no humidity.  I walked Jonathan to school and he was so cheerful and contented.  A friend came over shortly afterward and picked me up, and we went on a little shopping excursion and then had coffee and talked and laughed together.  I got home, only to head out soon again  to meet another friend at a noontime concert at St. George's Cathedral.  We spent an hour listening to the Cantabile Men's Chorus -- it was lovely.  Then I went to the market and bought some strawberries; berry season is here and they're so delicious!!

A beautiful day, start to finish -- well, technically it's NOT finished yet, but I'm optimistic.

*U2 song lyrics
Posted by Jeannie at 5:43 PM No comments: 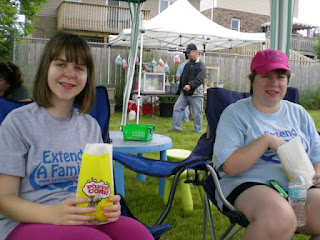 This past Saturday we went to Extend-a-Family's annual Walk & Wheel fundraiser.  We went on a 3 km walk, saw many of our friends, and enjoyed a BBQ.  Here's Allison with her friend Mallory ... 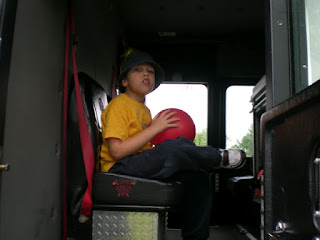 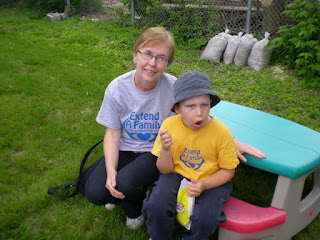 ... and me and Jonathan having some popcorn.  It was a good day.  Our family team (The Prinsenators) raised over $250.

Tomorrow is Rich's and my 22nd wedding anniversary.  Since it's hard to get away on the weekends and evenings, we did our celebrating today while the kids were at school.  We took the 10:30 a.m. ferry over to Wolfe Island and went for a walk, then went to the General Wolfe Hotel restaurant for lunch.  (The waitress kindly agreed to take our picture.)  Then we caught the 1:15 ferry back to Kingston so that we could be home when Allison got off the bus.  It was a nice little getaway -- thanks for coming up with the idea, Hon!  xoxo

Yesterday the principal of Jonathan's school phoned us at home.  No, he wasn't being expelled for bad behaviour (whew!).  She said that "Mr. O," Jonathan's EA, is being given a service award, and she asked us to write a little blurb to accompany the presentation.  Here's what we wrote:


"Mr. O" is a very important person in Jonathan's life.  His consistent presence at school makes Jonathan feel secure and is a big part of why Jonathan is eager to go to school each day.  Mr. O really seems to understand Jonathan as a person, and he has a good combination of gentleness and firmness.  He has patiently and persistently helped Jonathan to work toward his learning goals and to become more independent and social.  Mr. O also does not mind doing a lot of "yellow-blue-red," which is pretty much essential for anyone who works with Jonathan on a regular basis.  We really appreciate all he does for Jonathan and we know he is a wonderful asset to the Rideau School community.

This past week Allison went on a 3-day trip to Quebec City with the rest of the Challenge students.  This was their big end-of-year adventure, something they've anticipated since the fall; she really seemed to enjoy herself.  It's hard to believe her Grade 8 year is winding down.  The Challenge Program has been a wonderful experience for Allison, and she looks forward to continuing with some of her current classmates in Grade 9 Challenge at Loyalist C.V.I. this September.

This morning we had the Watoto Children's Choir at our church.  We'd never heard them before and it was awesome that Bethel got to host them.  There were about 30 kids and adults involved; their joyful singing and dancing and the colourful costumes they wore were just delightful.  But beyond the performance itself, it's amazing when you see what can happen when one or two people are given a vision or call and respond to that in a practical way.  Watoto's focus is on abandoned and/or orphaned children, giving them families to live in, education, health care, and hope for the future.  It's a wonderful program.

Posted by Jeannie at 8:21 PM No comments: