The kids now have 3 weeks of school under their belts, so it's safe to say we're getting settled into a routine. Jonathan is very happy in Ms. Mardicis' class, and his EA, Joe ("Mr. O"), is doing great work with him. It is nice to have the same person working with him all day, to keep things consistent and clear. Besides basic "academic" skills like math (sorting, number identification, counting) and language (letter recognition, matching letters), they work on physical, self-help, and social skills. Right now Mr. O is encouraging Jonathan to greet people with "Hi" and their name, rather than identifying them first by a colour or object (Jonathan tends to go up to teachers and say "skirt" or "blue"). One challenge is to channel Jonathan's interests/obsessions into teaching tools: for example, right now he's really into jigsaw puzzles, so Mr. O tries to find puzzles that relate to what the class is doing. Jonathan's also obsessed with shooting baskets, particularly throwing his ball into this thing on the playground that has red, blue, and yellow openings where the ball can fall out. He spends all of his recesses, some time after school, and an hour or so on most weekend days, doing this activity. I'm not sure how this can be translated into an academic activity (!) -- but the physiotherapist did suggest using heavier balls to increase Jonathan's upper body strength. It's neat to see the EA and other team members working together to improve his various skills.

Allison also seems happy in her grade six class. Her teacher, Mrs. Bush, runs a structured, teacher-directed class, and that structure seems to suit Allison. Mrs. Bush says that Allison works hard and participates enthusiastically, but social situations and accepting criticism and direction are still problem areas. However, she really enjoys connecting with Jonathan at recess time, and also comes home for lunch with Jonathan, which is a nice break in her day.

So far things seem to be going well in the world of school.
Posted by Jeannie at 11:33 AM No comments: 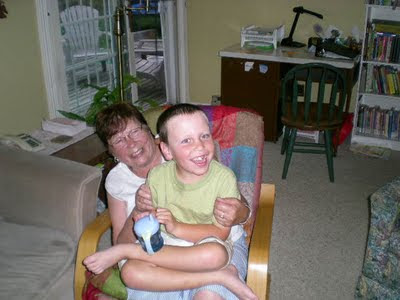 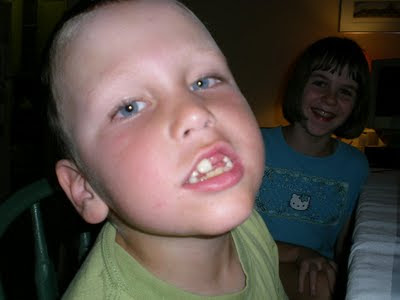 Posted by Jeannie at 8:04 PM No comments: 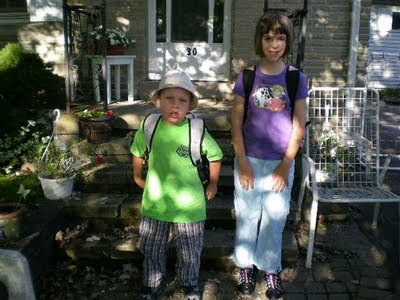 Yesterday was the first day of school; here are Jonathan and Allison all ready to go. For the first time, they are attending the same school, which is really exciting.

Up until a few days ago we assumed Jonathan would go into Grade Two with a new teacher and probably a new EA -- but one thing you learn about the primary grades is that nothing is ever really set in stone. Last week Jonathan and I were at the Rideau playground where he loves to play, and the principal came out to talk to us. She said she would try to let us know in advance who Jonathan's EA would be. On Friday night at 6:30 she phoned us with the good news that not only would Jonathan have "Mr. O" as his EA (Mr. O'Connor worked with him for about 1/4 of the day last year), but they were also going to be forming a grade One-Two class to be taught by his former teacher, Ms. Mardicis -- and Jonathan would be assigned to that class. So yesterday, instead of getting used to a new entrance, new room, and new teacher, he went in the same door to the same room with the same teacher as last year. For some kids, having the same teacher 3 years in a row wouldn't be desirable, but for Jonathan this consistency is great. Ms. M. said that he came right in and sat on the carpet and knew exactly what to do. He is a bit perturbed that his special friend Ms. Beals, who was his EA for the first 3/4 of the day last year, is not with him any more; he sees her on the schoolyard and watches her lovingly, wondering why she isn't coming to take him to class. But he likes Mr. O and I think they're going to have a great time together.

Allison is entering Grade Six and for her, everything is new. She is going from a school of 65 kids to one of 400+, so it's a huge change. But we got a chance to meet her teacher, Mrs. Bush, last week, and she seems very friendly, caring, and enthusiastic. Although it's only been a couple of days, so far Allison seems to be enjoying the experience and seems quite unfazed. So we're really looking forward to a good year at Rideau Public School!

Posted by Jeannie at 2:57 PM No comments: