Today I'm linking up with the Five Minute Friday community, writing for five minutes on a given prompt.

This week's word is MEASURE.


For the past few years I've been struggling with double vision. It's something I've always had a bit of trouble with: whenever I was having my eyes tested and the eye doctor would show me two separate images and ask me to tell him when they merged into one, I found it very difficult -- and the problem has only gotten worse.

Several months ago I was referred to an opthalmologist who specializes in strabismus (misaligned eyes); she told me I  have a "moderate misalignment." The options, from least to most invasive, are (1) to put prisms in my glasses, which I already have; (2) Botox injections, which numb/plump the eye muscle and need to be done every 3-4 months; or (3) surgery to adjust the eye muscles and straighten out the eyes. I've decided to go for the surgery, so last week I got started on the process for that.

The first step was to be fitted with a Fresnel prism. I had an appointment with an orthoptist at the opthalmology clinic and she did all kinds of tests and measurements on my eyes. 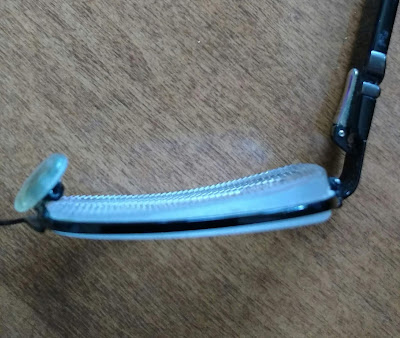 Fresnel prism on right lens of my glasses. I already have
very thick lenses because of nearsightedness, but the prism
is very, very thin. You can see the ridges at top.

Here is what the Fresnel prism looks like when it's on. It is a thin flexible plastic film, smooth on one side and ridged on the other. The orthoptist cut it to fit my glasses; the smooth side sticks to the inside of one lens, with water -- sort of like a removable window decal. 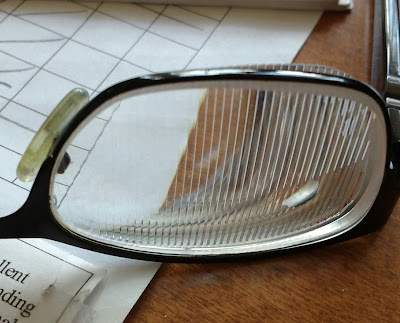 This is what I am looking through with my right eye.

When I have this prism on my glasses and look into the distance, it fuses the two images into one -- so I no longer see two clocks, or two stop signs, or two of the same person coming toward me. That part is awesome.

It feels pretty strange, though: I'm constantly looking through these tiny ridges, and they create quite a glare. The lens also gives a slightly curved effect, so there's a bit of a fishbowl sensation. But after a week I'm getting used to it, and I'm very much appreciating the improvement in distance vision. The idea is that I use this prism for several weeks/months to see if it will keep my eyes from turning in, so that surgery can then be performed.

The big downside is that the prism interferes with my close-up vision. It's a lot harder to work on the computer (it's like I'm staring through glasses that have had Vaseline smeared on one lens), and I pretty much have to remove my glasses altogether to read. Considering how much of my day is spent reading and working on the computer, this is a major bummer.

But I'm determined to see this through -- no pun intended. And hopefully, the eventual outcome will be measurably improved vision.


Today I'm linking up with Five Minute Friday, writing for five minutes on a given prompt. This week's word is PLACE.

(*We wrote on this word before, in August 2017. This is the link to the post I wrote back then, on a totally different subject.) 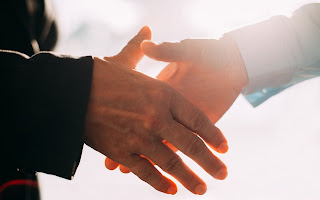 My Thursday women's group at church has been studying the book of Hebrews. Last week we were talking about Hebrews 11, the "faith" chapter, which lists many heroes of faith like Noah, Abraham, Isaac, Jacob, Joseph Moses, and Rahab.

Then the writer alludes to all the others whose names are unknown, those who underwent torture and deprivation:

"...They went about in sheepskins and goatskins, destitute, persecuted and mistreated—the world was not worthy of them. They wandered in deserts and mountains, living in caves and in holes in the ground. These were all commended for their faith..."

As we talked about these verses, I was reminded of another passage I had recently been reading, from Mark 10. James and John come to Jesus and ask, "Let one of us sit at your right and the other at your left in your glory."Jesus responds by saying that it's not up to him to decide who will sit in these places of honour -- "These places belong to those for whom they have been prepared" -- and he reminds the disciples that whoever wants to be great must first be servant of all.

Thinking of these two passages together, I wondered aloud if maybe one of those obscure, unnamed faith heroes from Hebrews 11 might be given one of those places of honour at Jesus' side.

I even wonder ... and hear me out here ... if maybe someone from another religious tradition might get one of those places -- one of those "sheep from a different pen" that Jesus refers to in John 10.

If that's even possible, then I think it might be someone like this Muslim man in Christchurch, who greeted a gunman with the words "Hello, brother" before being killed along with 48 other worshippers.

One Twitter user wrote, "As he faced a rifle, his last words were peaceful words of unconditional love. DO NOT tell me that nonviolence is weak or pacifism is cowardice. I have seen the face of God."

I don't know exactly how God decides who will be granted those places of honour in his new kingdom. But if faithful endurance and peace in the face of unspeakable adversity count for anything, then maybe this man will be recognized. The world is not worthy of him.

March 2019 Quick Lit: On Reading Well by Karen Swallow Prior

Today I'm joining blogger Modern Mrs. Darcy for "Quick Lit," where we share short reviews of what we've been reading. Although the book I'm reviewing here is not the only book I've read recently, I wanted to give it a slightly longer treatment, so I'll cover my other recent reads in a future post. 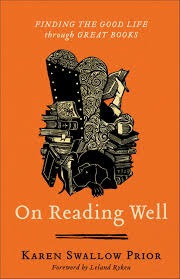 On Reading Well:
Finding the Good Life Through Great Books
by Karen Swallow Prior

I asked my library to buy this book several months ago; it did, and eventually I got the book into my hands -- but I did NOT want to give it back! Clearly I am going to have to buy my own copy, because it's excellent.

This book is about virtue and literature. In the first chapter, Prior introduces the theme of classical virtues, addresses the need in our day for a return to virtuous living, and reminds us that not only does good literature show us the virtues, but the very reading of that literature is a way of practicing them.

In each of the subsequent chapters she discusses one virtue -- altogether four cardinal virtues, three theological virtues, and five heavenly virtues -- and expounds upon each one in relation to a work of literature. The literary work may present a character who epitomizes that virtue (as in the patience of Anne Elliot in Jane Austen's Persuasion or the courage of Huck in Mark Twain's Huckleberry Finn) or a character who demonstrates the lack of that virtue (as in Jay Gatsby's lack of temperance in The Great Gatsby or Ivan Ilyich's lack of love in Leo Tolstoy's The Death of Ivan Ilych). In each case, Prior shows how the proper expression of each virtue is a moderation between extremes: for example, courage is a mean between cowardice and rashness.

Particular parts of the book stood out for me. One was her discussion of how young Huck Finn has to work through the effects of a malformed conscience: he's been taught slavery is right, so he thinks helping Jim must be wrong -- but when he realizes in his heart that he must help Jim, he's determined to do so even if it means going to Hell. Another was her claim that the virtue of faith in Shusako Endo's Silence can only be truly understood by interpreting the book as a tragedy. And another was her chapter on kindness in George Saunders' short story "Tenth of December" -- a story I was not familiar with -- where she compares a character's suicide plan to her own father-in-law's suicide. In these and other cases, she shows how the virtues are not static stereotypes, but living, flexible concepts that (ideally) grow within us as we work them out in both the mundane and the traumatic moments of our lives.

As with the previous books by this author that I have read (Booked: Literature in the Soul of Me and Fierce Convictions: The Extraordinary Life of Hannah More), Prior's love for her subject matter comes through on every page. As I read each chapter, I felt like I was listening to an engaging lecture. On Reading Well is a book any reader -- or even any person who thinks they "should" become more well-read -- will appreciate. And it's a book I'll definitely want to re-read.

Time to order myself a copy....