This past weekend I watched this YouTube video that Ann Voskamp shared on her blog as part of her weekend collection of uplifting content.

It's a 5-minute video of Irish pilot Michael McMahon taking his little brother Robbie on his first airplane flight. 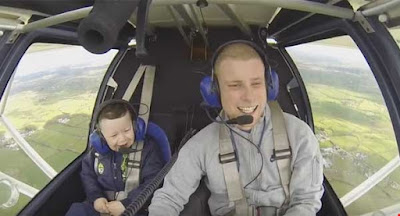 There's not much to it, really. There are no "YOU WON'T BELIEVE WHAT HAPPENS AT 3:12" or "WHEN I SAW WHAT HAPPENED NEXT, MY JAW LITERALLY DROPPED!" moments ... no death-defying rolls or flips in the air ... no emergency landing. Still, I bet that once you've watched it, you'll want to see it again.

"We've been there for you" 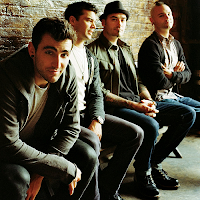 Last week I went with Allison, her friend, and her friend's mom to a concert here in town by the Canadian group Hedley.  It was a great show by a very talented band. I remember watching Canadian Idol in 2004 when 20-year-old Jacob Hoggard reached the third-top spot before being eliminated. Twelve years later he heads one of the most popular groups in Canada -- and apparently loves every minute of it. The best entertainers create a rapport with their fans, and Hedley did that: making jokey calls from a fan's cell phone, tossing out picks and water bottles, and hauling out what looked like a massive SuperSoaker to blast canisters of T-shirts into the crowd.

Then at one point Jacob Hoggard sat down at the edge of the stage to chat intimately (!) with the 5,000 or so concert-goers. He thanked the fans for supporting the band for 10 years, buying the concert tickets and merchandise. "You've been with us all along," he said. "You've been there for us. And I want you to know -- we've been there for you, too."

The crowd went crazy. But his words gave me pause, and I'm still thinking about them. What did he mean by that? In what meaningful way could he assert that he and his bandmates had been there for their fans? The person in the crowd struggling with school or bullying or addiction or anxiety or whatever isn't going to call up Hedley for support; the person celebrating a graduation or an engagement or marriage wouldn't expect them to be a direct part of that experience.

But when I thought back to when I was a teen, his words made more sense. I never went to concerts, but the musicians and songs I listened to on the radio formed the soundtrack of my teenage life, with all its ups and downs: the Bee Gees, the Eagles, Fleetwood Mac. I might not have identified with (or even understood) all the lyrics, and it never occurred to me to call on Barry Manilow for support in a time of crisis -- but these musicians were a huge part of my life. I remember one Friday evening (and if I refused a babysitting gig, then I apologize to my friends the Stretches) I was firmly resolved to stay home. Andy Gibb was going to be the guest star on Donny & Marie, and there was no way I was going to miss that. He was so good-looking! And he had such awesome feathered hair! I was devoted. (I suppose you could say I was there for Andy.)

So I think Jacob Hoggard was tapping into some strong emotions when he talked about being there for the fans, especially younger people. Maybe he was recalling his own youthful days, the music he played or listened to, how that formed the soundtrack of his life and gave him a place to put his dreams and longings -- and he wanted to give that back to his fans.

But then I got thinking about how Christianity is also focused on being with and being there for. How one of Jesus' names is Immanuel, "God With Us" ... how Jesus promises his disciples, "I am with you always" ... and how God says, "Do not be afraid, for I am with you." Those are just a few of many examples in the Bible. But what does that mean? Is God just a familiar, pleasant soundtrack to our daily activities? Is God just a container or shape for our longings -- a projection of our desires? Is that all "God with us" means?

Right in the middle of these ponderings, I was reading Dallas Willard's Hearing God, and I came upon this passage in a chapter entitled "Never Alone":

... when our first child was born[,] I realized painfully that this incredibly beautiful little creature we had brought into the world was utterly separate from me. Nothing I could do would shelter him from his aloneness in the face of time, brutal events, the meanness of other human beings, his own wrong choices, the decay of his own body and, finally, death.
It is simply not within human capacity to care effectively for others in the depths of their life and being or even to be with them in finality -- no matter how much we may care about them. If we could only really be with them, that would almost be enough, we think. But we cannot, at least in a way that would satisfy us. For all of us the words of the old song are true: "You must go there by yourself."
That would be the last word on the subject but for God. He is able to penetrate and intertwine himself within the fibers of the human self in such a way that those who are enveloped in his loving companionship will never be alone ... The completely adequate word of faith in all our sorrows and all our joys is "Immanuel, God with us."

When I read this, it brought into focus everything I'd been thinking about. I loved how Willard spoke so confidently -- and obviously from personal experience -- about that intertwining of God's heart with ours, that intimate relationship. God is more than just a soothing presence in the background while we do our homework or an idealized symbol of all we long for. God is Creator, Father and Mother, Friend, Provider, Healer. God is with us in a way that no human person can be, and in ways we often don't even realize. He never leaves us alone.

So of course Jacob Hoggard's words to his audience weren't "the last word on the subject." He and his band mates can't possibly be there for thousands of people in anything but the most indirect and superficial way. Yet I was still moved by what he said because he was recognizing that need we all have to be acknowledged and loved, and connecting with that need in a way that wasn't self-serving, but warm and appreciative. And that's what all of the best artists do: connect with the human heart. They can't provide ultimate fulfillment, but they can point the way -- sometimes directly, sometimes just by articulating what we all long for: someone to be there for us, so that we're not alone.

That night, Jacob got me thinking about God.