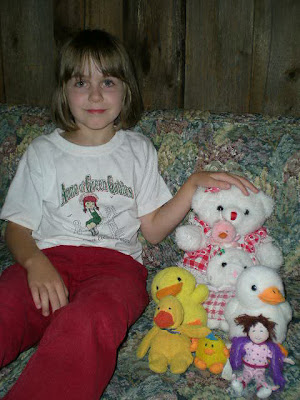 ... one is silver, the other gold."
Here is Allison with her collection of favourite friends, freshly washed and looking their best.
In back is Hearts, with Pinkie in front of her.
Middle row, left to right: Ducky, Cara, and Splashy.
Down in front: Quack, Chicky, and Junie B. Jones.
Here's to friends, stuffed or otherwise!
Posted by Jeannie at 10:45 AM No comments:

They sometimes say that the only constant thing in life is change, but sometimes you just want to say, "ENOUGH!"

This morning I walked Jonathan to school. I spied his teacher, Mme Bordeleau, in the schoolyard (in the middle of a cluster of other adults) and pointed her out to him. Just then the principal approached us and summoned us over to the gathered group. As we walked over, she told us that Mme Bordeleau was leaving.

It turns out that the enrollment for English kindergarten was higher than expected; and since the provincial government wants to cap all primary classes at 20 students, they are going to have two English kindergarten classes instead of one. So there will be a new kindergarten teacher teaching both the Mon/Wed class (Jonathan's class) and the newly-created Tues/Thurs class; and Mme Bordeleau is switching to a different school.

Apparently this has been happening at a lot of public schools this fall, as registrations are always in flux for the first couple of weeks.

The positives in this situation are
(1) that Jonathan was not switched to the Tues/Thurs group. Because he stays on his original Mon/Wed schedule he can still attend nursery school on Tuesday and Thursday afternoons, and go to his Thurs. morning church program with Phyllis.
(2) that his class will now be smaller, allowing for more individual attention.
(3) that Mrs. Stewart, who is the classroom EA and a really nice woman, will be staying with the class.

But it's still a huge disappointment to know that Jonathan will not have Mme Bordeleau this year after all. Our association with her was short, but she really seemed like the perfect teacher for Jonathan. The reality is, though, that Jonathan will probably adjust very well. He has only had her for 4 mornings and will probably get used to someone new in no time. Today she gave Jonathan a Blue's Clues stuffed toy from the classroom that he'd been especially interested in. Goodbye Mme Bordeleau--we will miss you!
Posted by Jeannie at 2:17 PM No comments: 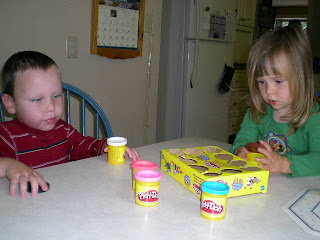 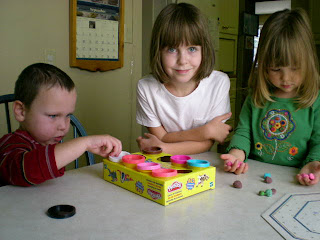 Today Allison and Jonathan spent a few hours with their cousin Sadie, who will be 3 next Friday! 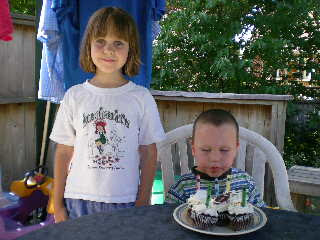 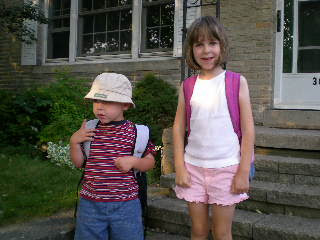 Yes, Franceen, I'm starting to do this picture thing! This week I got a digital camera and am figuring out how to take and view photos, put them on the computer, post them to my blog, mail them ...
Here you see Allison and Jonathan celebrating Jonathan's birthday and heading off to school. 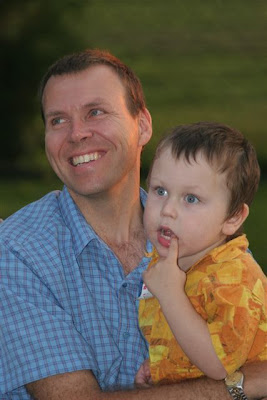 Today we're delighted to be celebrating Jonathan's fifth birthday! (Here he is with Daddy.) It's hard to believe that 5 years have already passed since we brought him home. Jonathan is a funny, feisty little guy who makes us laugh and (to be honest) cry. We can't imagine our family without him! Jonathan, we hope you have a great day and a great year at school. We love you a lot!

"A lovely morning" at kindergarten

This has been an exciting week for Jonathan. It's been exciting for Allison too, but a little more predictable since she has the teacher she expected for grade 4 and is back with almost all of the same classmates. But for Jonathan this is a week of firsts.

On Wednesday I took him to an open house at his new kindergarten classroom at our local public school. He met his teacher and the Educational Assistant who works with the class, and he checked out the toys in the classroom, but he was fairly noncommittal about it and was eager to leave after a half-hour.

On Thursday afternoon he had his second open house: this time at his nursery school, which he went to last year and which he'll be attending on the alternate days from kindergarten. Now this was a different story entirely. He was so obviously comfortable and happy and at-home in the nursery school room: he went right in and found his favourite toys and played contentedly for the entire hour. He was also delighted to see Laurie and Janet, his teachers, again.

Today was the Big Day: his first morning of kindergarten. Rich and Allison and I all went with him to the schoolyard. There were many kids and parents milling around, and it was very hot. Before we even entered the yard Jonathan was crying, clinging to Rich, and saying "Go! Go!" The bell rang, and his teacher appeared in the doorway. Jonathan rushed inside, forgetting his backpack; when I took it to him he cried and screamed. The teacher encouraged me just to leave, so we left the schoolyard feeling a lot of trepidation about how things were going to go.

Rich and I stayed home all morning just in case the school were to call us. Amazingly, they didn't! We had coffee on the deck and read books and realized that we hadn't had a morning like this since before Allison was born. Such is the experience of all parents sending that last child off to school, I suppose.

We're starting Jonathan off with mornings only at kindergarten, so at 11:30 we headed back to the school. We went into the quiet hallway and peered in the window of the classroom door. All was peaceful and organized; most of the kids were working at desk activities, and we saw Jonathan and a classmate playing a game on the carpet with the EA. When the teacher saw us, she invited us in and said "He's had a lovely morning!" She said the crying had stopped very quickly, and she reassured us that it was best to leave quickly each morning and not worry. She also showed us some "work" he had done: a sheet on which he'd tried to trace a line through a maze--his first-ever kindergarten worksheet.

As we got him ready to leave, a classmate called, "Bye Jonathan!" and he waved and said goodbye to his new friends, whom he'll see again on Monday morning. All in all, a very good day to end a busy and exciting week.
Posted by Jeannie at 7:09 PM 1 comment: