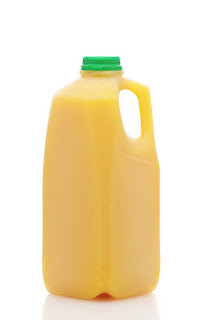 A few months ago, I started thinking about juice. Orange juice, in particular.

Our family drinks a lot of orange juice, and we had always bought the small plastic or cardboard cans of orange juice concentrate which need to be mixed up in a jug with three cans of water.

This is not a difficult job, really: dump the concentrate into a jug, stir in the water. But it got to the point where I was making juice almost every day, and I was getting really, REALLY tired of it. (Note: "Just delegate this job to one of your kids," while a valid idea, is not the point here.)

I thought about how when we go on holidays we usually just buy large bottles or cartons of pre-made juice, because where we're staying doesn't always have the right jugs to mix the concentrate in. Pre-made juice is so much easier!

But somehow I felt it was wrong to buy pre-made juice on a regular basis.

If "wrong" seems like a strange word to use in this context, well ... when I look at it now, I see that it is a strange choice of word. But at the time, this was my reasoning:

Buying pre-made juice simply for convenience's sake was all very well for special occasions like vacation. But to buy it all the time? That was -- like I said -- wrong.

But on the other hand, I also wanted to quit the tedious task of juice-making and just buy the stupid juice!

So I broached this subject to Richard, and, as I might have expected, his take was different from mine. Amazingly enough, he seemed to give the whole issue very little moral weight.

"Is pre-made really that much more expensive?" he said. "And anyway, there are always sales."

So the next time I went to the store, I did it. I bypassed the orange juice concentrate and bought a couple of large cartons of pre-made orange juice. Yeah, don't mind me, just throwing off the yoke, being a rebel, etc.

When I got home, I got out of the car and went up to the front door to prop it open so I could bring in the groceries. And there, in between the doors, was a large, unopened carton of orange juice.

Turned out our neighbour had bought a couple of cartons of juice and it wasn't exactly the kind they'd meant to get (too much pulp, or not enough pulp, I forget which), so they  brought it over for us.

After my deep moral wrestling, seeing this carton of juice sitting there made me laugh out loud. It was like a sign -- HEY, FREE JUICE! -- telling me how ridiculous it was to attach so much moral significance to what kind of juice I bought ... and that I was actually totally free to buy orange juice in whatever form I wanted.

It's not that we don't need to address ethical considerations in our shopping and spending and consuming; these aren't totally neutral activities. But at times this can translate into tying ourselves in knots in an effort do what we think is the "virtuous" thing. "If it's inconvenient and tedious and cheap, it must be right." "If it's easy and convenient, it must be wrong."

But sometimes it's not a weighty moral conundrum.

Linking up with the Five Minute Friday community today, writing about the word JUST.
Posted by Jeannie at 3:38 PM 14 comments: