the thrill of victory! 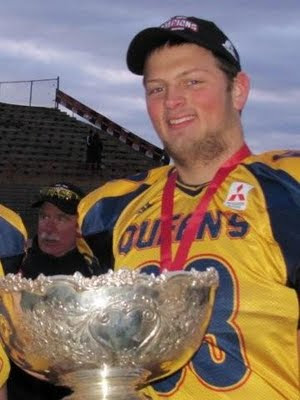 We're especially proud because our nephew Josh, who is in his first year at Queen's, is a member of the team. Congratulations Josh -- yay, Gaels !!!

Posted by Jeannie at 3:53 PM No comments: 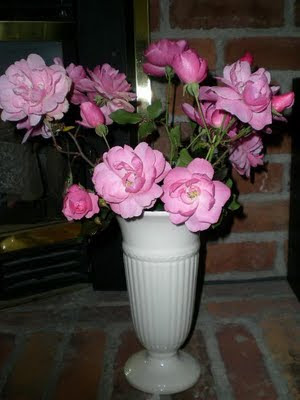 When we moved into this house in 2000, Audrey planted a rose bush for us in the back yard. The bush needed its regular cutting-back, and I finally got around to doing it earlier this month. There were all these beautiful fresh blossoms at the ends that weren't being enjoyed, since we're no longer out in the back yard; so I made this bouquet from them. Somehow they seem even more beautiful because they bloomed in a month that is usually so dreary.
Posted by Jeannie at 2:32 PM 1 comment:

Help! My computer is haunted!

... or at least that's part of my excuse for not posting in so long. Computers are kind of like cars, as far as I'm concerned: you go happily along, using them on a daily basis, not giving much thought to what goes on inside them or how they work, and then suddenly they don't work and you're completely befuddled. I've taken our computer in to a repair shop three times in the last week and a half. First there was a problem with the power supply: the computer would start up and then immediately shut down. It took several days to locate a replacement part, but they got it working. However, when I took it home, it worked fine except that as soon as it was shut off it would start up again (kind of the opposite of the original problem). I took it back, and they solved that problem -- but then when I got it home again, it started turning on whenever the phone rang, which was completely bizarre. I called the technician and he said he had never heard of that before. I took it back in and he commented that perhaps the computer was possessed. (I suggested we call an exorcist.) Anyway, they were able to locate the glitch and now it is working fine. I have the exorcist on speed-dial just in case, though...

The second-last time I posted, the kids were sick and the school rife with illness. I had a bad cold which lingered a few weeks and plugged my ears and sinuses. But Rich got the worst of it: on Nov. 1 he woke up with the flu and was flat-out for a week, with headaches, fever, and weakness. He started to feel better after about 5 days but then his fever spiked again, so he went to a clinic a couple of days later and was put on antibiotics for pneumonia (he's had that before, but fortunately this time he got the meds early and didn't wait for it to become very severe). After 2 weeks he was back to his normal self and is feeling great, thankfully. Jonathan got so used to Rich being sick that even after he was better Jonathan would say "Daddy nap? Daddy blankets?"
Posted by Jeannie at 2:20 PM No comments: