Here's a list of the books I've read this year, with brief reviews and stars out of five. If you're looking for ideas of what to read (or not read), hope this list gives you some.

Alone in the Classroom (by Elizabeth Hay). The narrator, Anne, delves into the past to find out more about her aunt Connie, a teacher; Connie became entangled in a situation with a student she tutored, his doomed sister, and a disturbed, creepy principal. Anne’s own relationship with Connie’s former student leads her to more discoveries about Connie, the principal, and herself. This is an interesting book which for me raised more questions than it answered – yet I didn’t find that frustrating; it seemed to work. And Hay’s writing is beautiful. ***

Amy and Isabelle (by Elizabeth Strout) explores the difficult relationship between an embittered single mother and her teenage daughter. ***** (Strout has become one of my favourite writers: her novel Abide With Me is also excellent.)

As We Are Now (by May Sarton). I stumbled on this unusual little book while browsing through the library. It is a very well-written but depressing short novel about an elderly woman in a run-down nursing home, desperately seeking some beauty or kindness to make her final days meaningful. ***

Come, Thou Tortoise (by Jessica Grant) is the quirkiest and funniest thing I’ve read in a long time. Audrey (aka Oddly) Flowers travels from Oregon back home to Newfoundland when she finds out her father is in a “comma oops I mean coma.” This crisis forces her to face the truth about her grandmother, her father’s best friend (whom she mistrusts), and her beloved Uncle Thoby. Audrey shares the first-person narrative duties in this book with her tortoise, Winnifred. *****

Faith (by Jennifer Haigh) is about a Boston priest accused of child molestation. The narrator is the priest’s sister, who is seeking the truth about the charges and about her brother’s complicated relationship with a young single mother. ****

Housekeeping (by Marilynne Robinson). Orphaned sisters Ruth (the narrator) and Lucille are cared for by a series of reluctant relatives until their homeless aunt Sylvie moves in. The sisters’ responses to their aunt’s eccentric caregiving are very different; in the end there may be only one way Ruth can avoid being separated from Sylvie. Robinson’s prose and her depiction of characters are amazing, though I confess that some of the reflective parts of the novel went over my head. **** (By the way, Robinson’s novels Gilead and Home are both wonderful. They explore the same situation – the relationship between a dying minister, his best friend, his dutiful daughter, and his prodigal son – from two different perspectives.)

Nightwoods (by Charles Frazier). Luce is living quietly in an abandoned hotel in the North Carolina woods with the children of her murdered sister. When the deceased hotel owner’s grandson, Stubblefield, comes to see his inherited property, Luce’s belief that you can’t count on anyone is challenged. Eventually the murderer appears too, looking for some lost money that he thinks Luce has. Luce and Stubblefield must work together to protect the children and confront the killer. There is violence in this novel, but it’s secondary to Frazier’s exploration of the characters’ motives (he takes us into the heads of all the main characters) and to his depiction of the Appalachian setting. There’s no neat-and-clean justice here, but the ending is satisfying and the story is absolutely riveting. *****

Olive Kitteridge (by Elizabeth Strout) is a collection of interconnected stories about the lives of people in a small Maine town. Olive is a crusty retired schoolteacher who appears in every story – sometimes as main character, sometimes as only a minor figure. At first she seems thoroughly unlikable, but gradually we come to sympathize with her. ****

People of the Book (by Geraldine Brooks) is a huge, sweeping novel about a Jewish haggadah (family prayer book) and its journey across the centuries from medieval Spain to 21st-century Sarajevo. The thread tying the narrative together is the story of Hanna, an Australian rare-book restorer who examines the haggadah. I found Hanna’s story less interesting and compelling than the various historical sections of the novel, which are full of rich detail about the different time periods and places. The novel as a whole shows how religion has been both a dividing and (occasionally) unifying force throughout the centuries. ***

Still Alice (by Lisa Genova) is about a brilliant psychology professor who develops early-onset Alzheimer’s. To me it isn’t great literature, but it certainly details many facts about the disease and examines how it affects not only the sufferer but family and friends. ***

Summer of the Bear (by Bella Pollen). A London woman flees with her three children to her home village on a remote Scottish island after her husband, a spy, dies in mysterious circumstances. For me, the mystery part (involving Cold-War intrigue and nuclear proliferation) was a bit of a fizzle, but what is really interesting is Pollen’s portrayal of the four family members’ expressions of grief. ****

The Center of Everything (by Laura Moriarty) is one of the best books I read this year. Young Evelyn sees the world as black-and-white: she accepts her religious grandmother’s view of life and scorns the foibles of her struggling single mom. But as she matures and gains more life experience (first love, friendship, a handicapped brother), she realizes that the world is much more complicated than she thought – and that her mother may in fact know a bit more about right and wrong than Evelyn gave her credit for. *****

The Help (by Kathryn Stockett) uses the voices of three women (black maids Aibileen and Minny and wealthy white girl Skeeter) to depict race relations in 1960’s Mississippi. Skeeter enlists Aibileen’s and Minny’s help to write a book about black maids, a risky project that leads all three women to new understanding and decisions. I found the ending a bit facile, but the voices of the three women are very well conveyed, and the story as a whole is touching, funny, and uplifting. ****

The Reinvention of Love (by Helen Humphreys) explores the love triangle between Victor Hugo, his wife, and his friend. This novel contains some examples of Humphreys’ lovely prose, but I didn’t find myself moved by or drawn into the love story. **

A Jane Austen Education (by William Deresiewicz) tells of how the author learned about love, family, and himself by reading (reluctantly at first) the Austen novels. What affects him most about each novel may not always be what we would consider the highlight, but that makes it all the more interesting to read. ****

Falling Upward (by Richard Rohr). Rohr’s argument is that our lives can be divided into two distinct halves. In the first half we are focused on the “container” of our life: establishing our beliefs, career, family, etc. In the second half, which may often be precipitated by a life crisis that our first-half answers aren’t sufficient to address, we focus on the “contents” of our life and (it is hoped) come to a deeper, more loving, and more accepting approach to ourselves, others, and God. ****

Life With Sudden Death (by Michael Downing). At 45, novelist-playwright Downing discovered he had the same genetic heart defect that led to the sudden but uninvestigated deaths of his father and brother. The book details how Downing navigated the medical system, came to terms with his family dynamics, and learned to trust his own version of his life story. ***

May Sarton: A Biography (by Margot Peters). Having read a novel by Sarton (see above), I thought I would read this biography, particularly since it was written by the same person who wrote the Charlotte Bronte bio (below). I can’t say I “enjoyed” this book, but it was fascinating -- in a train-wreck sort of way -- to read about a person whose childhood insecurities led her to be completely narcissistic, controlling, and obsessive. Sarton left many hurt people in her wake and never really found the critical acclaim or love she craved. A sad story of a sad person. **

Twelve by Twelve (by William Powers). Burned-out by his work in activism and global development, Powers spends four months living in 12’x12’ house owned by a wise doctor who is attempting to live a sustainable life (and who is protesting against the American government by living in a house too small to require property tax!). I thoroughly enjoyed Powers’ honest reflections on the American dream, race, big business, nature, and mindfulness. *****

Unquiet Soul: A Biography of Charlotte Bronte (by Margot Peters). I had never read the full Bronte story, and I really enjoyed this detailed description of her and her sisters’ tragic yet fascinating lives. ****

I hope you enjoyed these mini-reviews. Next on my to-read list: Steven Galloway’s The Cellist of Sarajevo.

I’d love to know what you’re reading too. Half the fun of reading a book is sharing it!
Posted by Jeannie at 3:11 PM 1 comment:

Email ThisBlogThis!Share to TwitterShare to FacebookShare to Pinterest
Labels: books 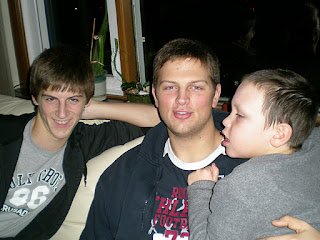 We had a nice time at Richard's mom's on Boxing Day with her and the Napanee Prinsens and Uncle Ed. Here are Corey, Josh, and Jonathan hanging out. 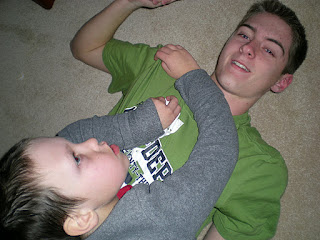 Jonathan checks out which cousin is most comfortable to lie on top of, and chooses Luke. 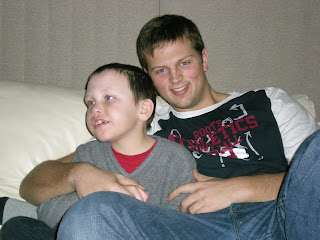 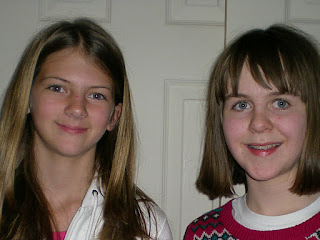 Posted by Jeannie at 8:12 AM No comments:

Email ThisBlogThis!Share to TwitterShare to FacebookShare to Pinterest
Labels: Allison

the (Christmas) play's the thing 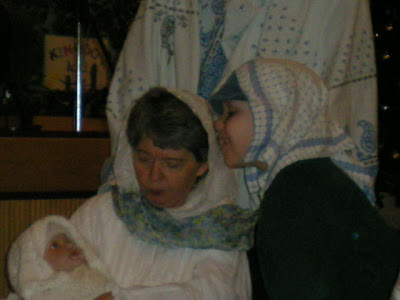 Not to be outdone by his sister, Jonathan performed in a play last night too: the Christmas play at Friendship Group (aka Circle of Friends) at Westside Fellowship Church. Jonathan was a shepherd, and a very affectionate one at that -- he and Mary and the Baby really clicked! :-)
Posted by Jeannie at 8:53 AM No comments:

They say you only live once, but apparently you can die twice. This past Tuesday, Allison's gr. 8 Challenge class at Calvin Park P.S. performed "Macbeth." Allison had 2 small roles (Macduff's son and Young Siward), both of which involved her being stabbed to death onstage. In one case she was dragged offstage by her feet! The whole class did an amazing job, considering they only had about a month to prepare.

I think what really struck me was how much of a "high" Allison was on after the performance. She was absolutely beaming onstage at the curtain call, and just walking on air for about an hour afterward (despite dying twice). It's neat (and a bit surprising) to see how much pleasure she gets out of acting -- this is definitely something she should pursue as she goes on in school.
Posted by Jeannie at 8:05 AM No comments: