This Advent season I'm posting one of my Christmas stories on this blog every Wednesday.  (Last week I posted "Christmas at the Coffee Shop"; the week before it was "The Two Jewels." ) 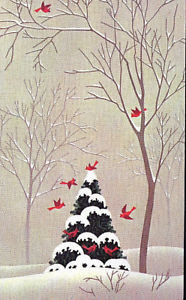 In a small clearing, deep in the middle of a great forest, there lived a community of cardinals.  In wintertime, when snow carpeted the ground and turned the trees’ boughs heavy and white, the little birds sang and hopped and flew from ground to branch, happy and free.  What a pretty sight it was to see them, with their red beaks and their red and brown feathers, rummaging on the ground for seeds, calling to one another, and peeking in the nests some had made in stumps and hollows.  And above the clearing, Snowy Owl would often look down from a branch and smile, even as his watchful eyes swept the sky and treetops, looking for anything that might endanger his little friends.

Once a week the female cardinals met for a special get-together, and how the chirping and singing increased then!  They loved to drink maple sap, so one of the birds always came to the meeting place early to ensure there was enough sap for everyone.  A couple of them were in charge of bringing special treats, and it was delightful to ooh and aah over what was brought: perhaps some extra-tasty berries from a far-off bush or some delicious seeds or nuts.  The birds would eat, and laugh, and gossip a bit, and mostly just hear each other’s news.

One of the cardinals was named Goodberry – or at least that was what they called her, for she had an exceptionally red beak and wing-tips.  Even her cheeks were unusually red.  Goodberry had been part of the group for a long time.  She was friendly, and caring, and somewhat quiet.  She did not speak often, or very loudly, but when she did, she said things that were wise and thoughtful, things that clearly came from a deep heart.  And when she laughed, it was a beautiful sound.

Week after week, the girls met to talk, laugh, eat and drink, and celebrate their friendship.  Their cosy clearing seemed like a place of warmth and safety, and their hearts were light and carefree.

Then one day as they were visiting together, Snowy Owl called down to them from a nearby tree.  “A hawk has been seen not far from here,” he said in his deep voice.  “Be on your guard, and keep watch.”

All of the cardinals began chirping anxiously.  “A hawk?” said Goodberry.  “I do not want to meet up with a hawk.  I hope he stays far, far away and does not bother us.”  And all her friends agreed.  Yet in the coming days they all became a bit more watchful and wary, and their little clearing somehow no longer seemed as cosy and safe as before.

One day, as the cardinals gathered for their weekly meeting, they noticed that Goodberry was missing.

“Where is Goodberry?” asked one.  “She is never late; we can always count on her.”

“And she is not bringing treats today,” said another.  “If she was, I would say she was out finding something extra special.  Her treats are always so delicious, you know.”

“Maybe she stopped to help a friend on her way here,” said another.  “That is just the kind of thing she would do.”

They were all sure that Goodberry would be there soon, for she was very faithful.  But time passed, and she did not come.  Just when they were beginning to worry, Snowy Owl swooped down into the middle of the clearing, a grave expression on his face.  “I have bad news,” he said.  “This morning the hawk was in this part of the forest again, and it saw Goodberry’s bright red beak and feathers against the snow.”

The cardinals gasped.  “Did ... did the hawk attack Goodberry?” asked one.

“Yes,” replied Snowy Owl.  “I was able to chase it away, but not quickly enough.  Goodberry is still alive, but I do not think she will be able to survive much longer.  I carried her to a hollow tree” – here Snowy Owl’s voice became choked for just a moment – “and she wants to spend her time quietly resting.  She was sure you would understand.  I am sorry to have to tell you this – but because you love Goodberry, I knew that you would want to know.”  Snowy Owl bowed sadly and then flew away.

The days afterward were hard ones for the cardinals.  A few of them, who were Goodberry’s closest friends, were able to visit her for a short time; but although they all hoped she might recover, it became clear, as the days passed, that that was impossible.  One stormy afternoon, Snowy Owl flew back into their midst to deliver the sad news that Goodberry had died.  It was a dark day for the birds, and the howling wind and bitter, swirling snow seemed to reflect the cold sorrow in their hearts.  When they realized they would never see Goodberry again, they mourned, and their carefree songs were silenced, so that no sound was heard but the whistling of the wind through the trees.

Snowy Owl visited the cardinals often in the following days, because he knew that his presence was a comfort to them.  One day, one of the birds said, “I still cannot help thinking of Goodberry, off by herself that morning.  What was she doing?  Why was she late?”

Snowy Owl smiled, and his face looked happier than it had in many days.  “I can show you what she was doing,” he said.  “Would you like to come and see?”

He led them out of the clearing, a short distance through the forest to a sheltered area in a small valley.  In the middle of that hollow was a spruce tree – not too tall, but full and thick.  And covering its fragrant boughs were shiny berries of all colours ... thin strips of white bark that draped like icicles ... pieces of lacy fern ... glossy brown acorns.

The cardinals all exclaimed in delight.  “Do you mean,” said one, “that Goodberry was decorating this beautiful tree for us?”

“A Christmas tree,” said Snowy Owl, “is a tree that is decorated to celebrate the birthday of the Forest King.”

“The Forest King!” they all cried.  But they were all wondering the same thing, and one of them voiced the question:  “But ... aren’t you the king of the forest, Snowy Owl?”

Snowy Owl laughed:  a lovely, deep, wise laugh.  “Oh, no,” he said.  “No, I am not the king of the forest.  Beyond the tallest treetop lives a great King who created these woods, the high mountains, the wide oceans and rushing rivers – everything in this vast world.”  Here the cardinals looked at each other in amazement, for they had not known there were such wonderful things beyond their little clearing. “And we celebrate his birthday by loving one another, being thankful, giving to the poor, making our homes beautiful, and singing songs of joy.  Would you like to hear one of those songs?”

They listened eagerly, for the cardinals, who loved music, had not realized that Snowy Owl knew how to sing.  In his low voice, he sang these words:

Joy to the world!  The Lord is come!
Let earth receive her King!
Let every heart prepare Him room,
And heaven and nature sing.

“That is a beautiful song,” said one of the cardinals.  “So if Goodberry decorated this tree, then she must have known all about the Forest King.”

“Yes, she did,” said Snowy Owl, looking around at their serious faces.  “My little friends, it is right to be sad that Goodberry is dead.  I myself feel sad that I could not chase the hawk away in time.  And I know that you feel sad because the one you loved is no longer here among you.  But even in our grief, we can also be joyful, because Goodberry has gone to live with the Forest King, and she is happy there.”

The cardinals spent a long time enjoying the beauty of Goodberry’s tree, but soon it was time to return home.  Snowy Owl led the way, and they followed him back to their clearing.  It seemed somewhat bare now, so some of the birds began to decorate the tree branches with berries and acorns and other things to make their home beautiful.  They discovered that Snowy Owl knew many more songs about Christmas and about the Forest King, so they asked him to teach them these songs.  When they sang them, they felt closer to Goodberry, and to the Forest King, whom none of them had ever met, but who they knew – deep in their hearts – was loving and good.  And at night, when the stars were glittering far above the treetops, the birds gathered in their woodland clearing, their hearts warmed with a strange, sad joy.  And heaven and nature sang.

© Jeannie Prinsen 2009
(This story was written in memory of Sharon Goodberry Hogan,
who was a member of my women's group at Bethel Church
and who died in the fall of 2009.)