The key to a good music program: great staff!

It feels like many of my recent posts have been tributes to people, and after today's phone call from Allison's music teacher, this one will be no exception!

When Allison was choosing her Grade 9 courses, she wanted to take Music, so she signed up for Advanced Music since she'd been playing the clarinet for two years.  But when the course started a month ago, it quickly became apparent that she would have been better off in Beginner Music.  Her teacher reported that she seemed overwhelmed with the theory part and was very nervous about playing in front of others  -- particularly since she'd returned her rental clarinet in June and hadn't played at all since then.  But she couldn't switch into the Beginner class because it conflicted with Phys-Ed., a required course; and her teacher recognized that changing into a totally different class two weeks into the term was probably not a good idea.  So he said, "If she wants to stay in this class, we'll adjust.  I'll work with whatever she can give me.  I'm not worried about the academic part -- the most important thing is her comfort level."  She decided to stay. He offered her the use of a school clarinet which she could take home daily to practice, since the performance aspect seemed to be especially stressful for her. 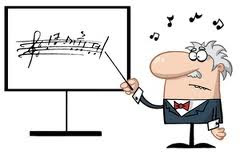 Yesterday was her first performance test, and she practiced faithfully beforehand.  Today her teacher called and left a message to tell us she'd done a great job:  "She really stepped up to the plate, and she sounded great, too.  I already told her that, but you can pass it on to her as well."  It's wonderful for Allison to have teachers who see her as an individual, who can draw her best work out of her, and who celebrate her successes.

Email ThisBlogThis!Share to TwitterShare to FacebookShare to Pinterest
Labels: Allison