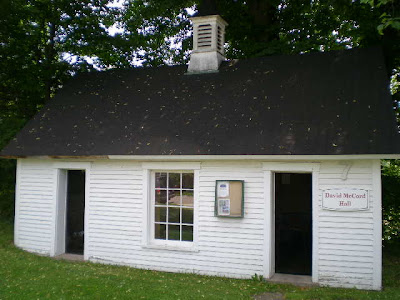 One of the highlights of my summer was attending three days of the Maritime Writers’ Workshop at the University of New Brunswick in July. UNB has a beautiful campus set on a steep hill; walking from place to place gives you a major workout. The Writers’ Workshop sessions were held in McCord Hall (see accompanying photo), a tiny building which you could be forgiven for thinking was a storage shed. In fact it used to be an ice house but is now a building designated specifically for writing classes and workshops.

Monday’s session was entitled “Getting Started” and was led by Jo-Anne Elder, a writer and magazine editor. Eight of us participated that day: six women and two men. (The small group size was, for me, one of the highlights of the sessions I attended.) This workshop was designed for people who want to get into writing, who feel stuck with their writing, who want to take their writing to the next level, etc. In general it was just an opportunity to be inspired and try different things.

Jo-Anne led us through many exercises during the day. She started by having us write rapid-fire lists of various things (5 things you shouldn’t have done, 5 things you should have done, 5 things you would never do, etc.) and then asked us which one was of most interest to us and held the most possibilities for writing. We did several 5-minute freewriting sessions using prompts such as “write a poem to an appliance” or “make up a new word and write about what it means.” We each wrote a dialogue between two people buying a piece of furniture; we then read our dialogues aloud with a partner and discussed how dialogue reveals character. We wrote postcard stories: short narratives designed to fit on the back of a postcard. We had a discussion about what we need in order to write and about what we fear most about writing; this was an opportunity to encourage each other and talk about what has or hasn’t worked for us. Jo-Anne also talked to us about online writing communities, NaNoWriMo (National Novel-Writing Month), contests, and other resources for writing.

I found this first day very helpful and inspiring. Part of that was Jo-Anne’s encouraging leadership; one thing she said that stuck with me was “Write for five minutes a day, and you have a writing life.” Another was “The time spent writing something is never wasted – it’s only wasted if you don’t finish it.” She urged us to carve out time in our life for writing and to plan ahead for projects, large or small, that we want to do.

This session was called, somewhat grandiosely, “Unleashing the Splendour Within: Life Writing,” and was led by Eve Mills Nash. (There were again eight participants in this workshop – six women and two men – although not all the same people as Monday.) Eve has written a memoir about her life as an abused part-native child and about her healing journey which led her ultimately to a Christian faith. In her view, life writing has to be done from a place of hope and redemptiveness; in the middle of pain is not the time to write a memoir. In light of this view, it made sense that her motto was the Biblical statement “All things work together for good.”

Eve talked a lot about writing as therapy: how healing can occur as we write about our lives, and how there is power in taking what is inside and bringing it outside. She led us through many different exercises that helped us explore our own experiences. In almost every case she asked us to share what we’d written so that we could talk about it; it was actually quite amazing to see the willingness of all of the participants in the group to share openly and make themselves vulnerable. Some people in the group were already involved in life writing, but others weren’t; yet the level of sharing and trust was quite profound.

We first had to write about our name: what it means, how we feel about it, etc. Eve then put several words on a blackboard and asked us to write about a memory that one of those words brings to mind. She then asked us to write a letter to someone with whom we had unfinished business. This exercise probably unleashed the most emotion, as people shared letters to grandparents, former lovers, former spouses, grown children, etc. She also asked us to identify our “petty tyrant,” the voice (whether of a real person, or just internal) that tells us we shouldn’t or can’t write about our life. She then suggested we draw our petty tyrant and write a “power word” across his mouth that symbolized how we would respond to that discouraging voice. This was a very empowering exercise for a lot of people, and in some cases we were even able to suggest a power word for a particular person based on what we saw in him or her.

Eve also reminded us of the long tradition of writers who had studied or taught in the building in which we were meeting – a tradition to which we now belonged – and then asked us to write a letter in which the walls of the room spoke to us about our future as writers. I found this a very encouraging exercise. I felt that the walls were telling me, “Keep on writing about simple, plain things and people ... When you write in these settings, people respond and say it sounds real. Write about children. Write out of your sense of humour. Make people laugh and nod and say, ‘Oh, yes, that’s familiar; that’s real and true.’ ”

Eve also led us through a guided imagery, in which we imagined ourselves taken by a guide to a mountain cave full of treasure, and were given a gift to take back with us. I felt that my gift was a voice: it took the shape of a white dove. When I open my mouth to sing, it flies out; and when I write, it flies out of my pen.

At the end of the day we were to write an affirmation of the person on our left, telling them what they reminded us of and what we thought their gift to the world was. Eve was on my right so she wrote my affirmation, saying that one of my gifts was “refreshing simplicity” and that I would be a writer of children’s books. (In fact, one of the men in the group had said earlier that he thought there was a children’s book inside me waiting to come out.)

All in all, this was a very exhilarating day. Everyone in the group was courageous in letting Eve take us to some deep places and allowing ourselves to feel and share whatever emerged. I’ve never been in a workshop anything like this before, and I learned a great deal from it.

This session was called “From Creativity to Craft: a First Fiction Workshop” and was led by Carla Gunn, who has written a young adult novel called Amphibian. Eleven people attended this session. This workshop was very different from the other two, where we spent almost the whole day writing; in this one, we wrote very little but spent a great deal of time reading and discussing published excerpts and pieces of group members’ work. Carla covered all the basic aspects of fiction such as point of view, tense, character, plot, dialogue, scene, etc. In advance she had invited members to submit portions of their work, so several of us had done so; and she included them at whatever point in the day seemed most appropriate. A few people in the group are actually working on novels, so it was very interesting to read bits of their work and give feedback and suggestions. Carla had also copied a number of excerpts from published works, which we used to compare dialogue, character, opening paragraphs, etc. Although we didn’t do any new writing on this day, I really learned a lot about fiction writing: e.g. the difference between dialogue that develops plot and dialogue that develops character, about different points of view and their relative merits, etc.

I had an amazing experience during these three days: I gained many new ideas for my own writing and learned a ton about writing in general. I consider going to these workshops, if not a once-in-a-lifetime opportunity, then a once-in-a-long-while opportunity. Way back in the winter my brother and sister-in-law Errol and Alycia invited us to come and stay with them in Fredericton so that I could attend these workshops. So I feel really privileged to have been able to do this. We had a great time staying with them and their extremely cute mini-Schnauzers Abby and Nola. I’m very grateful for their hospitality and thoughtfulness and for all the great memories I’ll have of this week.
Posted by Jeannie at 1:40 PM

Email ThisBlogThis!Share to TwitterShare to FacebookShare to Pinterest
Labels: writing