Once again I'm linking up with Kate Motaung and the Five Minute Friday community, writing for five minutes on a given prompt. Today's word is OVERCOME. 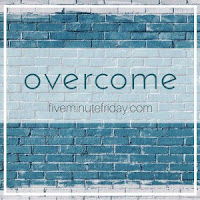 I have found as the mom of children with a disability that progress often happens very slowly. In some cases, it seems like it will never happen. I look at something Jonathan is having difficulty with and think, "He has been struggling with this same issue for so long now. Will he ever overcome it? Does he even want to?"

There's one particular area (which I won't specify) that he has had a lot of challenge with. Even earlier this year, at 14 years of age, he just wasn't "getting it." We would remind him and try to explain why he needed to be doing something different, but nothing really changed. It didn't seem that important to him. And it wasn't something we could force him to do, at 14  or any other age.

But this summer, almost overnight, something clicked. He figured it out. He started trying the new method and having success; and when we praised and encouraged him, his motivation increased. It's like he was standing in front of a low wall, staring at it with trepidation, moving closer and then backing away ... and then just like that, he stepped over it. There's still more to be done to be really finished with the process --  but he overcame the obstacle.

Because of this, I think I will be less likely to be discouraged when the next goal seems far-off and unachievable. It's OK, whether you have a disability or not, to move at your own pace, and overcome your obstacles when you're ready. 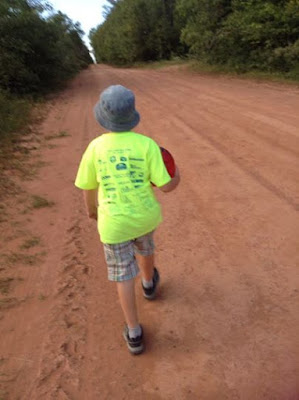