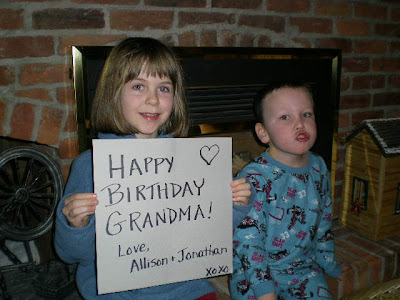 Love from the Kingston gang
Posted by Jeannie at 9:28 AM No comments:

This was a big day for Jonathan, although he didn't really seem to be aware of it! First of all, he lost his first tooth today. Where said tooth is now, we have no idea: he may have swallowed it or it may just be lost somewhere. He didn't even notice but just continued with his day.

This is also the first day Jonathan went to school for more than just the morning. Today I met with his teacher, the vice-principal, and the special services worker from the school board to discuss how he's doing and to plan extending his school day. So from now until March break he's going to go for the morning, come home for lunch, and return until 2:30 p.m.; after March break the plan is to have him stay all afternoon. This will mean a lot of running back and forth for me, but it's worth it to see that things are going well thus far and that the school feels he's ready for a longer day.

Everyone at the meeting was very positive about how Jonathan's doing and eager to make his school experience as beneficial as possible. This was great, considering I almost missed the conference meeting! Apparently everyone thought someone else was contacting us to tell us about the meeting--but no one had. I came home from an errand this afternoon at 1:20 and there was a message from the vice principal, asking was I coming to the conference at 1:00? AARRGGHH!! I ran out of the house, jumped in the car, drove to the school in less than one minute (no police car in sight, thank goodness), and raced inside. Fortunately the meeting was still under way, and everyone was very apologetic about not informing us. Oh well. Once my heart rate returned to normal, it was an excellent meeting, and we feel very happy about Jonathan's school environment.
Posted by Jeannie at 7:33 PM 2 comments:

Yesterday Rich went in the Kingston Roadrunners' Association's first competitive race of the year: the 8-kilometre Resolution Run. He came in 12th out of 111 runners and won a medal for coming first in the men's 40-49 age group. Way to go Rich!! See link above for a great photo!
Posted by Jeannie at 11:12 AM 3 comments:

Today I thought I'd share some of the books I've read/movies I've seen in 2007. (If you're anything like me, you're always looking for good ideas of what to read or watch.) This list doesn't include others I've mentioned elsewhere on this blog. Just to get really official, I'll rate them out of 5 stars.

* * * * * Deafening by Frances Itani. I just finished this novel and it is definitely the best book I've read in a long time. It is the story of a young woman who is deaf as a result of having scarlet fever at age 5. It is set in Deseronto, ON in the period before and during WWI. It even has a P.E.I. element. It's very moving and beautifully written.

* * * * Sweetness in the Belly by Camilla Gibb. It is about a young white Muslim woman named Lily; it tells of her life in Ethiopia and later in London where she works as a nurse. I learned a lot about Islam and Ethiopia's history, but also really enjoyed the depiction of Lily's own journey, as she falls in love with a young doctor and is separated from him during a political uprising in Ethiopia.

* * * The History of Love by Nicole Krauss. This novel has a complicated plot and is not easy to describe, but it's very well written. It tells the story of a book called The History of Love and how it affects an interconnected group of people in New York, Chile, and Poland over many years.

* * * The Pilot's Wife by Anita Shreve. It begins with a woman receiving the news that her husband, a pilot, has died in an plane crash. As she unravels the mystery of what really happened, she discovers that her husband has led a double life.

* * Bee Season by Myla Goldberg. (see below in Movies)

* Water by Bapsi Sidhwa. This novel is based on the movie Water by Deepa Mehta. It is about a young girl in India, married at age 8 and widowed soon after, who is forced to go live in a home for widows. It tells of what she and the other women experience there, especially one young widow who has a forbidden romance with one of Gandhi's followers. Because this is a novel based on a movie it's not really great literature, but it tells an interesting story.


Compared to the number of books I read, I watch very few movies, but here are a few standouts.


* * * * * Amazing Grace. This is about William Wilberforce's fight to get the British Parliament to abolish the slave trade. Very inspirational.

* * * * Something the Lord Made. This movie is about the relationship between a white heart surgeon and the young black man who helps him perform groundbreaking heart surgery on babies. The dignity with which the young man does his work in the face of racism is really inspiring.


* * * * Bee Season. This movie is based on the novel by Myla Goldberg, which I also read (see above)--but I liked the movie much better. It's about a little girl who is a spelling-bee champion; her father is a teacher of Jewish mysticism and tries to see if his daughter can reach God through the process she uses to spell words. The relationships between the parents, daughter, and son are very interesting. The teenage son, a spiritual seeker himself, is a particularly beautiful character.

* * * * Junebug. This intriguing, quirky movie is about an art gallery owner who travels to South Carolina with her new husband to track down an artist and to visit her husband's family for the first time. It's interesting to see how she fits into the family, particularly how she is showered with affection from her new, very pregnant sister-in-law.
Posted by Jeannie at 11:35 AM 2 comments: