I can't believe it's been a month already since last time -- but again today I'm joining Modern Mrs. Darcy's monthly Quick Lit linkup, where we share brief reviews of what we've been reading.

I read three books this month, all nonfiction.

Present Over Perfect: Leaving Behind Frantic for a Simpler, More Soulful Way of Living by Shauna Niequist. Niequist has published several books, but this one -- her newest -- is the first I'd read. I know she writes a lot about food and hospitality, and I wasn't sure if I would have a lot in common with her ... not because I do not eat or am inhospitable, but you know what I mean. Also, I am the total opposite of a frantic achiever type. But I absolutely loved this book. It's not quite a memoir, and it's not a how-to; it's one woman's reflections on how she found herself exhausted and depleted by busyness and striving, and how she learned to experience grace, freedom, and connection -- to her own true self, to her loved ones, and to God. I loved Niequist's thoughtful, warm style: frequently she describes a particular insight she's gained, then stops and says "To be honest, I'm not there yet" or "Full disclosure: I'm still working on this one." This book is for anyone who is feeling stressed by demands and expectations, wondering whether this is all there is, and longing to take the risk of just being themselves and living free and loved by God.

Love Warrior by Glennon Doyle Melton. I had already read Melton's Carry On, Warrior, a series of essays and blog posts largely taken from her "Momastery" website and blog, where she devotes herself to living life "unarmed" and vulnerable. That book was a somewhat zany, often hilarious, and touching read. Love Warrior is much grittier. This  memoir focuses on Melton and her husband Craig: how infidelity shattered their ideal-looking family and how they both had to unlearn unhealthy patterns from their past and forge a new, more genuine relationship. Interestingly enough, shortly after Love Warrior was published, Melton announced that she and her husband were separating amicably; she is currently in a new relationship with soccer star Abby Wambach. It might be tempting to think, Well, doesn't that just negate everything Melton says she's learned? But I didn't find that this knowledge made her journey any less legitimate. I guess that is the risk a writer takes when she puts herself out there the way Melton does; I still appreciate her honest, vulnerable approach and her determination to face with courage what she calls all the "brutiful" aspects of life and relationships. 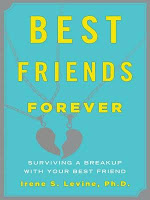 Best Friends Forever: Surviving a Breakup With Your Best Friend by Irene S. Levine. This book caught my eye because I could identify with its subject matter; I found it a helpful and informative discussion of women's friendships, how and why they sometimes go wrong, and how to move forward (with or without the friend) after a breakup.

I'm also currently halfway through several other books right now. I don't know if you're the type who must finish one book before starting another, or if you like to dip in and out depending on the day. I'm the latter. These three are worth taking the time to let sink in, so that's what I'm doing. They're all really good, but I'll give them actual reviews next time:

A reflection on demolition

The other day when I was out walking, I stopped to take this picture. St. Joseph St. Mary Catholic School -- Allison's first school, about six blocks from our house -- is being demolished.

When Allison started at this wonderful little school in 2003, there were over 75 students spanning junior kindergarten to grade five. By 2015, there was one class, consisting of only about seven primary students.

With numbers like that, closure was inevitable. But it's still sad to see the walls coming down and the rubble piling up. Right now the city is proposing that the property be repurposed for a combination of park land, affordable housing, and private development. It's the latter that is most controversial. No one seems to have objected to the demolition of the building itself; it was old and dated and would need a total, expensive overhaul if it were to be used for any other purpose. It's the question of what will replace it that's causing most of the concern.

Life is like that, too. Loss and change can be so difficult, and some things we lose are not replaceable. Sometimes we start out resisting or fighting the loss or destruction of something: a relationship, a job, a season of life. And when we're forced to admit that the loss or change is going to happen no matter what, we ask, When this is gone, what will take its place?

I felt that way when Jonathan graduated from Grade 8 in June. Of course we'd known it was coming. But suddenly it was imminent, and the prospect of change seemed so overwhelming: no more Rideau Public School. No more familiar faces. No more "Mr. O,"Jonathan's stalwart Educational Assistant for the past eight years. No more walking to school. Jonathan didn't really realize that this would be The End of a wonderful stage of life -- but we did.

Thankfully, the transition has gone well. Jonathan climbs eagerly on the bus each day, has clicked with his EA, Matt, and seems to enjoy the activities he's doing.

But there are some disorienting aspects, too. Jonathan seems to have lost interest in some of the things he used to love. He no longer wants to go to the schoolyard to do "yellow-blue-red" on the weekends. He doesn't want to go out and play ball in the driveway for an hour after supper anymore. He seems more cranky, and he gets much angrier and more unmanageable when things don't go his way. It's strange: on one level, things are going better than we'd hoped. But on another, they're so much more difficult.

Although demolition is what got me thinking along these lines, it's probably not quite the right metaphor in this situation. Jonathan's not being demolished; he's just growing up and changing. Many of the old familiar things that anchored his world and ours have faded away or changed, and we're all struggling to acclimatize ourselves to a new season -- but not knowing for sure how long that will last, either.

At times like this, this Bible passage encourages me:


The steadfast love of the Lord never ceases;
his mercies never come to an end;
they are new every morning;
great is your faithfulness.
- Lamentations 3:22-23


It tells me that in spite of changing circumstances, some things are steadfast, like God's presence and faithfulness. I need that reminder right now.