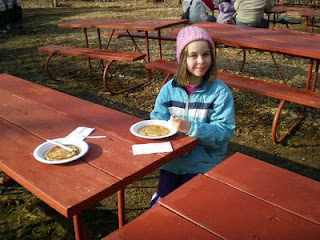 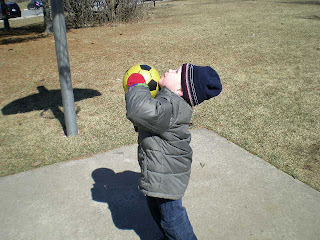 Wait a minute, you ask: wasn't March Break last week? Well, d-uh! The kids are back at school this week, so this is my March break.

Not that our "official" March Break was not good. The weather was fantastic: we were able to spend many hours outdoors each day. Jonathan spent most of his time shooting baskets, whether at his schoolyard or Rotary Park or in the basement or on the deck or in the driveway. His Little Tikes b-ball net is set up in the basement, and Rich has fastened a regulation-size net to the end of a board so it can be propped up against any wall, allowing for basketball any time, anywhere. And Jonathan has a very high boredom threshold when it comes to basketball; he can literally spend hours taking shots at an adult-height net, even scoring a few baskets now and then.

Allison, meanwhile, enjoyed a trip to the sugarbush with Rich (complete with pancakes outdoors -- mmm!) and lots of library visits to different branches around the city.

This week, though, we are back to the regular routine, and it feels good. Even with all the fun things we could do over the break, it is still very demanding to spend all day, every day with Jonathan and keep him happy and interested in things. Now he has the variety and interest of school to keep him busy, and I am enjoying the quiet time. There is nothing better than spending a whole morning at home and not talking to one other person -- just listening to the clock ticking and the woodpeckers pecking and even the washer going through its cycle. Hmm, I must be an introvert -- as if there was ever any doubt of that!

I have been getting back to my writing after doing nothing last week. Besides plugging away on my third "serious" short story, I have written a humorous children's story -- a good way to prime the creative pump and remind myself that writing does not always have to be work. Tomorrow I am going to have a writing consultation with the author Helen Humphreys, who has written several excellent novels and is the Writer-in-Residence at Queen's this semester. I have given her two of my completed stories to read before our meeting. The opportunity to get some helpful advice and direction from a very successful professional writer is too good to pass up.

I have always enjoyed writing and used to do a lot of it when I was younger, but only in the last few years have I really gotten back to pursuing it. It can be a frustrating process when things don't seem to be going well or when the wonderful ideas in my head don't seem to be translating to paper; but on the other hand there can be great exhilaration and that sense of losing myself in writing, which is wonderful. I feel sometimes that there are many limits on my life, on what we can do as a family, where we can go, what I can be involved in -- but in writing, there are no limits; I'm completely free.

I have also been doing some really good reading, especially novels: I have read The Tale of Despereaux by Kate Di Camillo, Home by Marilynne Robinson, and The Hour I First Believed by Wally Lamb; and I'm currently reading Sylvanus Now by Donna Morrissey (and have its sequel, What They Wanted, lined up to read next). They are all excellent, but about as different in style as any four books could be. Reading a variety of styles is really helpful to me as a writer; it makes me realize that there's no one "right" way to write well. Mother Teresa said "Pray as you can, not as you can't," and I apply that to writing too: "Write as you can, not as you can't."

Last week I had a hilarious encounter with a boy who attends Jonathan's school. I was sitting on a bench in the lobby waiting to pick Jonathan up for lunch and was joined by a chunky, jolly fellow named "N--" who was waiting for a bus to take him to another program. Here follows our brief conversation:

Me: So, what grade are you in?

N: Well, I'm really in five but I say I'm in six because I got held back a year.

Me: Oh, and they thought they should separate you?

N: Yeah ... on account of last year I accidentally stabbed him with a pair of scissors.

I certainly hope that wasn't one of the ups!
Posted by Jeannie at 1:24 PM No comments: