Something I read on Twitter last week got me thinking about the clothes that were in fashion when I was a teen.

Lee overalls were a popular item, and I had a pair in navy-blue corduroy. Overalls are kind of impractical when you stop and think about it, but I didn't care about that: I was just extra cautious in the school washroom so that I didn't come back to class with my straps twisted -- or with one strap wet from falling in the toilet! 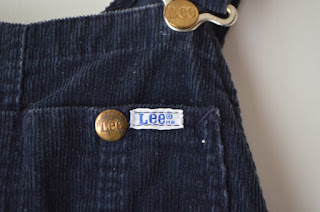 Levi's were also very much in style: the jeans and cords, of course (I had rust-coloured Levi's corduroys), and those gingham shirts with the all-important tag on the front pocket. 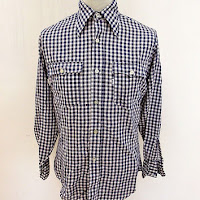 We wore hoodies back then, too, except we called them kangaroo jackets. (Did anyone outside Prince Edward Island call them that, I wonder?) I had a red pullover one that I wore constantly, often under a denim jacket. It strikes me now that many of the clothes that were trendy at that time were quite unisex -- not to mention timeless. I wish I still had all those items. Well, not the overalls, maybe... 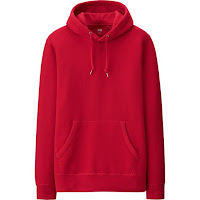 And let's not forget Adidas sneakers. Some of them were white-with-blue-stripes, and some were blue-with-white-stripes. I had a pair that looked very much like the ones in this picture; I wore them till they fell apart. Actually, I think I ruined them when I was working as a flagger on a road construction crew and accidentally stepped on hot asphalt.

It might sound like I was always buying the latest styles or begging Mom and Dad to buy them for me, but I think these examples stand out because they were exceptions. A lot of the time, in fact, I wore hand-me-downs from my cousins or other relatives. I didn't mind, though; I thought it was fun to dig into a bag of clothes in the hope of finding some treasures. I still do!

Once when I was around 14, somebody gave us one of those bags of hand-me-downs. In it I found a pretty blue flowered shirt that buttoned up the front and had white trim at the collar and cuffs. It was loose and flowing and very striking. I thought it was beautiful, and I proudly put it on and wore it to school.

The second time I wore it, we had a substitute teacher, and she was wearing the very same shirt, only the flowered print was brown instead of blue.

This could have been nothing more than a eyebrow-raising coincidence -- except she was pregnant.

I'm sure the teacher never said a word (though she may have kept an eye on me for signs of morning sickness), and I don't remember if anyone else did either, but I know I endured a day of mortification. After school I came home, stuffed the blue flowered shirt at the bottom of a drawer and never wore it -- or even mentioned it -- again.

It doesn't take much for me to conjure up that teenage feeling of wanting to get it right, look right, be right -- and the shame of thinking I'd gotten it wrong. I didn't have a strong enough sense of self to say "I'll wear what I want and make my own statement, no matter what anybody thinks" -- but I wasn't mature enough to laugh it off and turn it into a funny story at the supper table, either. I guess I was a pretty typical teen in both respects.

If only we could believe, at age 14, that it really, truly doesn't matter what shoes we buy ... or whether we have the "right" tag on our pocket ... or whether we're wearing the "wrong" shirt.

If only we could believe, at age 14, that one day we really, truly will laugh at these moments of humiliation.

A full week: 2 graduations and a prom 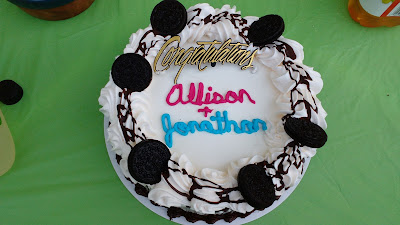 This past week has been a huge one for our family! Here's a brief look at the highlights, with a few pictures that -- while they don't do justice to the emotions behind them -- at least give a little glimpse.


On Tuesday Jonathan graduated from Grade 8 at Rideau Public School. Jonathan has attended this outstanding school for nine years. Ever since the first day I walked in the door to ask about registering him for senior kindergarten, we have received continuous support and help to meet his every need. He has had a full-time educational assistant (the amazingly patient, dedicated, and irreplaceable Mr. O'Connor, a.k.a. "Mr. O") to help him achieve his personal learning goals in all areas: academic, social, and physical. His classmates have encouraged and helped him. All staff, from principal to teachers to EA's to custodians, have been his friends. 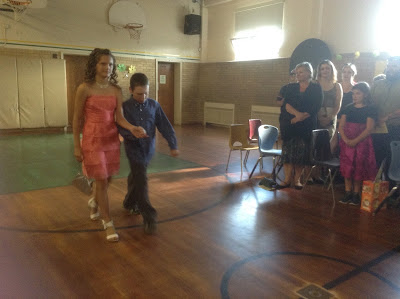 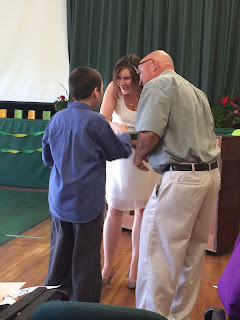 Jonathan receiving an award from his music teacher, Mrs. Pixley,
with Mr. O, his educational assistant, helping out. 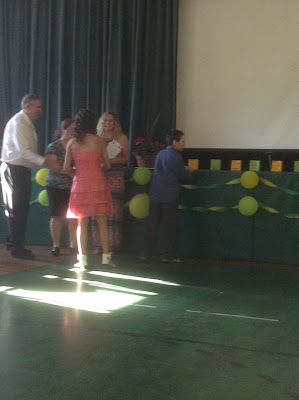 Jonathan got a little shy when it was time
to go up for his diploma. 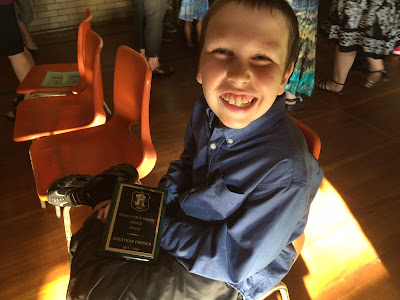 His graduating class was small: only five students. As a result, the graduation was very personal and informal, and each student had a chance to shine. Each student received an award highlighting his or her specific strengths; Jonathan's was the Service Award, based on his great love of recycling and picking up garbage, as well as helping with breakfast club. 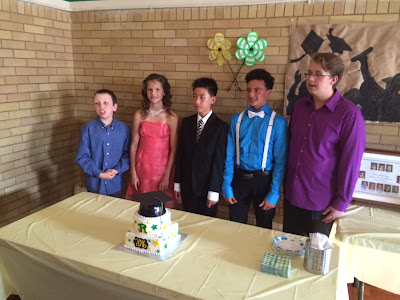 Next year Jonathan will attend high school at KCVI (Kingston Collegiate & Vocational Institute); he'll ride the bus every day, a new experience that he's sure to enjoy. There have been many people involved in making this a successful transition for him, and we hope for good things in September. But we will never forget Rideau. It has truly been a home-away-from-home for Jonathan for the past nine years. 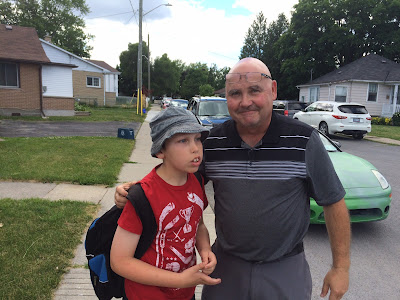 Jonathan and Mr. O, saying goodbye on the last day of school.

On Wednesday was our second of two graduations: Allison's grade 12 graduation from LCVI (Loyalist Collegiate and Vocational Institute). Allison has had a good four years at this excellent school. The staff have been so helpful and resourceful in encouraging Allison to be the best she can be as a student and as a person. Allison was on the honour roll (80% average), was named an Ontario Scholar (80% or more in her best six grade 12 courses), received a French Certificate (for taking French in all four years of high school), and got a subject prize for her Advanced Placement Statistics course. 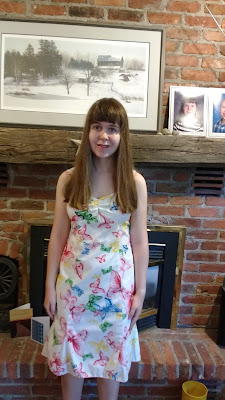 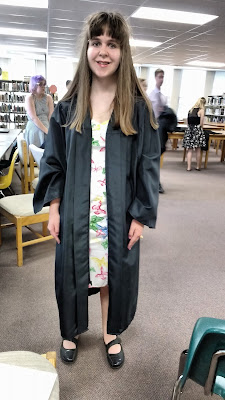 The graduation ceremony was long, in part because a staff comment was read about each student as he or she received a diploma. This is what Allison's said:

"Allison courageously and enthusiastically advocates for the rights of others and the dignity of those facing personal challenges. Although academic excellence comes easy to her, she approaches each new task with enthusiasm, determination, and commitment."

That describes Allison pretty accurately. We are so proud of her. 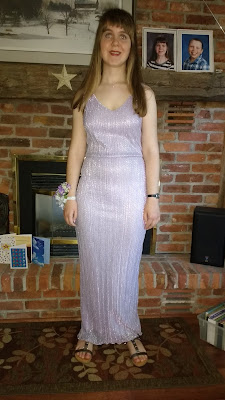 Allison, dressed up and ready for the prom.

The last big event of the week was Allison's prom. She looked beautiful in her new dress, shoes, and jewelry. Unfortunately, her friend Alex, whom she'd invited as her guest, wasn't able to attend; but Allison went on her own anyway. When I dropped her off at the venue, I was so impressed by the friendliness and kindness of the other girls, who showered her with compliments and drew her in to the group. She enjoyed her evening.

So it's been a full week, and such a blend of emotions: pride and happiness, yes, but sadness too. Here's to the next stages of Allison's and Jonathan's journeys. I know they'll give us many more reasons to be proud.