In a shocking turn of events, I've decided to change the name of this blog from "Little house on the circle" to "Jeannie Prinsen."

One reason I made this change is that there are numerous other blogs out there with "little house" names, such as "Little house on the hill" and "Little house on the corner." I also thought it would be easier for people to find my blog if it had my name in the title. And basically I just felt it was time for a change.

But besides the title (and the font!), it's really the same old blog. I haven't been posting much in the past several months--for reasons I've explained in recent posts--but I'm hoping to be more consistent with this in the future. I hope to see you back here again soon.

Posted by Jeannie at 1:53 PM No comments:


For the first time in a while, I'm linking up with the Five Minute Friday community, writing for five minutes on a given prompt.


This week's word is UNKNOWN.

There's a thing going around Twitter right now that says,

There's only ONE MONTH left in the decade.
What have you accomplished?

When I first read this question I thought, OK, what goals did I set for myself and meet? What projects did I embark on and finish? What aspirations did I strive toward and reach? And I realized I didn't have many of those.

There were a few small things, like writing poems and having a few of them published. That was gratifying.

But the things that stand out in my mind from the past ten years aren't achievements; rather, they're life-altering passages in my and my family's life:

I'm not going to list my decade's worth of accomplishments on Twitter. Instead, I'm going to enjoy the people in my life and do the work I'm called to do, recognizing that the coming decade will have many unknowns of its own to be faced and walked through. 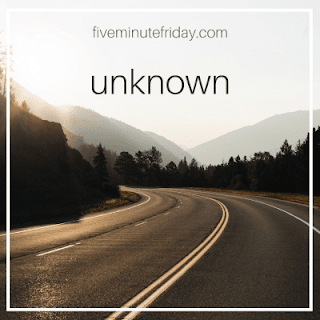