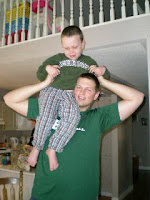 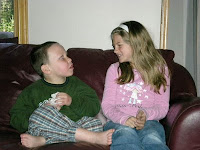 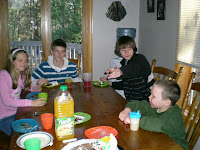 We had a very happy Easter Sunday celebration with Rich's mom and Doug & Caroline's family. Here is Jonathan riding high with Josh, sharing a joke with Cara and enjoying some cake with Cara, Corey, and Luke. (Allison was actually present, but she was more interested in her own quiet pursuits than in being goofy!)

Posted by Jeannie at 2:35 PM No comments:

I've already had a couple of requests for the recipe for Peanut Butter Bumbles (a.k.a. beeta-bees), so here it is:

Combine peanut butter, icing sugar, crumbs, and butter together in a bowl. Mix with hands to make a soft dough. Shape dough into ovals (the size is up to you; we made them about 2 inches long, which made about 20 bees). Place on cookie sheet (greased or covered with wax paper).

Use almond slices to make wings. Place finished bees in fridge or freezer to set. Enjoy!
Posted by Jeannie at 8:54 AM No comments: 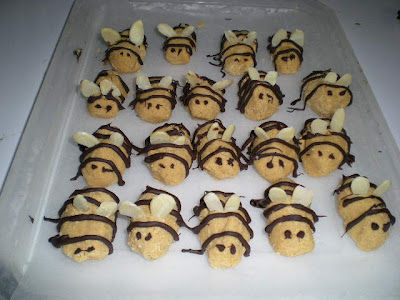 OK, that heading and this photo definitely require some explanation! Allison found a recipe for these Peanut Butter Bumbles in a magazine, so we decided to make them for Easter. The body is a mixture of peanut butter, icing sugar, butter, and graham crumbs; the stripes and eyes are chocolate; and the wings are almond slices. Jonathan's word for peanut butter, since he was about 3 years old, has been "beeta-bee," so of course we had to call these beeta-bees. Cute, aren't they? And yummy too -- one of them fell apart so of course we had to put it out of its misery. Tastes like a Reese's Peanut Butter Cup. Recipe available upon request. :-)
Posted by Jeannie at 7:27 PM 1 comment:

stations of the cross

Today Allison's grade 4/5 class did a presentation of "Stations of the Cross", and parents, staff, and other students were invited to attend. It was a very impressive performance. The boy who played Jesus was dressed in white, while the others wore dark clothing. Their only props were three large crosses. With dramatic music playing softly in the background, the children would move into position to enact some particular part of the Easter drama (e.g. Simon carrying Jesus' cross, the soldiers pounding the nails, Jesus' followers weeping, etc.), and then they would freeze. At that point the overhead projector was turned on for a few seconds so that the scene was lit up and shadows cast on the wall. Then the projector would be turned off and the children would move into position for the next scene. It was amazing to see how quickly and smoothly they took their positions, how expressive their poses were, and how serious and grave they were in performing.

The whole series of tableaux took only 5-10 minutes. Afterward, Allison's teacher invited members of the audience to ask questions of the characters. It was very interesting to hear the children's answers: one boy, for instance, said that his character didn't really want to crucify Jesus, but "they might kill me if they knew I was on Jesus' team" and "Pilate might fire me and I need my job to support my family." The girl who played Mary said, "I was really sad that they were killing my son, and I was afraid they might kill me too." Allison's character said, "I was sad that Jesus died because my daughter had been sick and Jesus had healed her." On a lighter note, a teacher complimented the students on how well they had stayed in character, and one boy said emphatically, "Well, it wasn't easy!"

I'm very glad I didn't miss this beautiful presentation. I have been to many Good Friday services but this was so simple and touching and the children took it so seriously.
Posted by Jeannie at 2:18 PM No comments:

For nearly a year now I've been part of a writers' group with three other women: Pam, Lori, and Ann. We meet every second Monday evening for two hours to share our work and give one another feedback. It has been a great experience for many reasons: seeing what others are writing inspires us, getting advice on our own work helps us know how to develop and edit it, and having regular meetings motivates us to keep plugging away at whatever we're writing so as to have something ready to share. And beyond the discussion of each other's writing, we are also able to share our lives in a more personal way, encouraging each other through events like a 65th birthday, cancer treatment, return to school, or new job.

This past month, three of us were able to get appointments with author Helen Humphreys, who is currently writer-in-residence at Queen's, to get feedback on our writing. Her comments were extremely encouraging; she even urged each of us to pursue getting our work published. After meeting three of the four of us she stated emphatically that we had a great writing group. Well, we knew that already!

Last night we met and discussed the euphoric feeling of having a successful, well-known author compliment our work that way. We have come a long way in one year. We are also adding a fifth member, Kate, to our group, so we are growing too. And personally I would never have believed one year ago that I would now have four stories written and another nearing completion. So it has really been a wonderful experience.
Posted by Jeannie at 1:46 PM No comments: 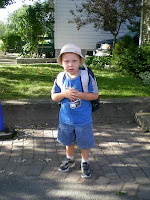 This week Jonathan got his second Grade One report card of the year. It is interesting to see all the different ways his teacher is assessing him and how he is doing in these areas. Some of Jonathan's accomplishments are:
- consistently recognizing the letter J
- successfully going to the bathroom
- matching, and usually identifying, numbers 1-5
- naming some of his classmates and all of his teachers
- taking turns in a game
- making a cut in a piece of paper with scissors
When compared with his Grade One peers, who are writing letters and learning about punctuation, Jonathan's achievements may seem small. But for him, they represent big strides in his learning. It is wonderful to see how comfortable and at-home he is at school and to observe many people (kids from other classes, older students, staff) greet him by name. School is really Jonathan's second home and we are very grateful for how happy he is to be there.

This week Jonathan also had a regular checkup with the pediatric neurologist, the first appointment since his seizure and flu in February. He is now on two anticonvulsant medications, and the doctor affirmed that while he may have some breakthrough seizures, the drugs probably lessen the severity of the episodes and help contain the seizure in his brain, rather than it affecting his limbs and the rest of his body (which would explain why, when he had the seizure at school, the teacher did not really observe spasms, just unresponsiveness, eye-rolling, etc.). The doctor also confirmed that the seizure was likely triggered by the illness he had the next day -- she said that on the first day of a virus it is often in the bloodstream and only later does it settle in one area such as the throat or ear or whatever. So it is not surprising that Jonathan's last two seizures (in December and February) each came the day before he came down with a bad illness.

Sometimes we have so many questions about why Jonathan has these seizures, why he's developmentally delayed, whether one caused the other or they are unrelated ... and even the neurologist does not really know the answers to these questions. It is really a challenge to live with the unknown and with the mystery of why things are the way they are, and to be content without definite answers. We can say for sure that Jonathan brings a lot of joy into the lives of the people around him.