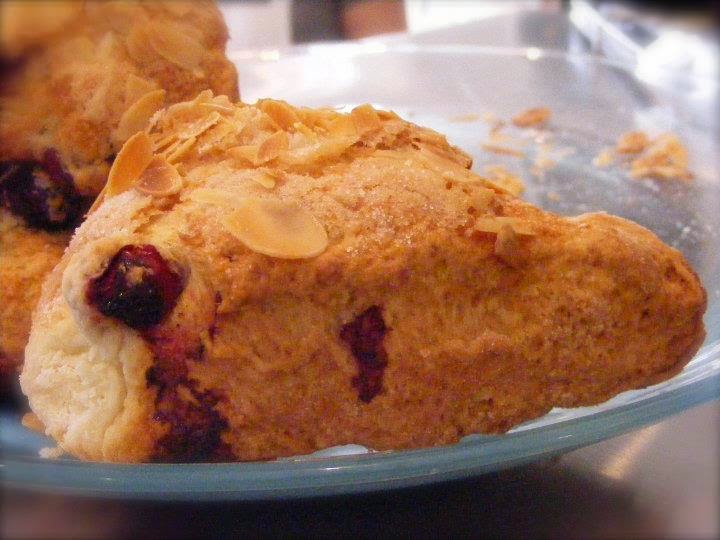 Today marks six months since my mom died.  Although this may seem like a strange way to commemorate this milestone, I'm posting a picture of a cranberry-almond scone from the Dancing Goat Cafe in Cape Breton, Nova Scotia.  Mom and Dad went to Cape Breton a couple of times in the past few years with their close friend Linda.  This cafe, and these scones in particular, were a special favourite of Mom's.

Last summer when Mom became sick, and before we knew just how sick she really was, one of her most significant symptoms was that she lost all interest in food.  We spent a lot of time trying to think of things she might like to eat, but with little success.  She would say wryly, "Dad thinks if I just start eating again everything will be fine."  And I guess he did think that.  We all did:  we thought -- hoped --  that Mom's illness was something relatively minor like an infection, or tiredness due to stress, and that when her appetite returned, so would her strength and health.

One day during that time Linda's daughter Deb, who is also a close friend of my parents, dropped by the house.  She had been in Cape Breton and brought back a box of cranberry-almond scones from the Dancing Goat Cafe.  We asked Mom if she'd like one, and she thought she might.  She ate a quarter of a scone, and we practically celebrated.  We defaulted to those scones many times over the next few days when no other food seemed to interest Mom; she would eat a few bites and seemed to enjoy it.

But her appetite never really returned.  Not long after this, she was hospitalized; a few days after that we received her cancer diagnosis; and she lived only six more weeks.

I spent the last week of Mom's life at the apartment with her and Dad.  Many other relatives and friends came in and out during that time.  One day Deb visited again with her friend Dorothy, whom Mom also knew.  Mom's face lit up enthusiastically when the girls came into her room, and she asked Dorothy how things were in Cape Breton; then she quickly drifted back into unresponsiveness.  I stepped out to let them have some time with her, and I marvelled at my almost-80-year-old mom being visited by two young women in their twenties, to whom she was a beloved friend.

Later that week I answered the door and there was Deb again, this time with another friend named Saskia.  (She had gone to my parents' church for several years, and her parents were friends of Mom and Dad's as well.)  Both girls were carrying two big white bakery boxes, and each box contained six cranberry-almond scones.

Mom couldn't eat anything more at that point, and she died just a couple of days later -- so she never did taste one of those scones. But really, that didn't matter.  What mattered was what they symbolized:  love.  Not just a stingy little crumb, but love in all its extravagance.  The message was, "You love these.  We love you.  So we'll bless you with them, lavishly, because we can.  While we can."

A famous quote by the writer Marcel Proust, in which he meditates on the memories that the mere taste and smell of a cookie evoke, says this:

But when from a long-distant past nothing subsists, after the people are dead, after the things are broken and scattered, taste and smell alone, more fragile but more enduring, more unsubstantial, more persistent, more faithful, remain poised a long time, like souls, remembering, waiting, hoping, amid the ruins of all the rest; and bear unflinchingly, in the tiny and almost impalpable drop of their essence, the vast structure of recollection.

- Marcel Proust, Remembrance of Things Past (In Search of Lost Time)

Having been through this experience with my mom, I've been reminded that the smallest thing can have great significance.  A scone can be more than just a scone.  It can be a symbol of love -- one that remains, persistent and faithful, long after the breaking and scattering.