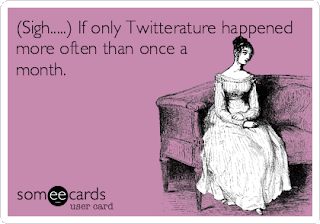 Monday is my day for quotes on this blog -- a.k.a. "Monday morsels"-- and this Monday also coincides with Modern Mrs. Darcy's monthly "Twitterature" linkup where we share what we've been reading.  (I love "Twitterature," but believe me, I couldn't keep up if it happened any oftener!) 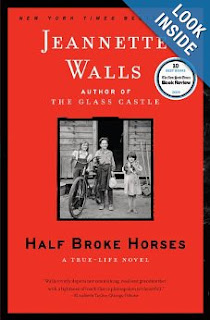 1.  I just finished reading Half Broke Horses by Jeannette Walls.  (I read her memoir The Glass Castle some time ago.)  This "true life novel" is the story of Walls' maternal grandmother, Lily Casey Smith.  Lily grew up in Texas and Arizona and became a horse-breaker at age 5 and a travelling schoolteacher at age 15, then later a rancher and pilot.  I can't say this book particularly moved me:  Walls speaks in Lily's voice, adopting a certain "when the going gets tough, the tough get going" style that can prevent the reader from making a strong emotional connection.  But the details are fascinating, and I liked Glass Castle so much that I found it extremely interesting to learn more about another eccentric member of Walls' family.  Lily was, as Walls herself puts it, quite a character:  tough, driven, and fearless.  In this excerpt, Lily has just suffered a ruptured appendix in a baseball game and is now in hospital:

"Don't worry, angel," [Dad] said.  The appendix, he explained, was a vestigial organ, which meant it had no Purpose.  If I had to lose an organ, I'd chosen the right one.  But, he went on, I'd almost lost my life, and to what end?  I'd only been playing a game of baseball.  If I wanted to risk my life, I should do it for a Purpose.  I decided Dad was right.  All I had to do was figure out what my Purpose was. 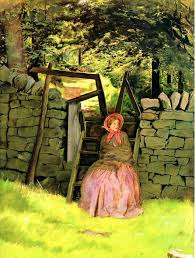 2.  I'm re-reading Jane Eyre as part of a synchro-read with Classical Quest.  I first read JE as a  university student and have returned to it several times since.  It is such a wonderful book, gripping readers right from the gloomy opening sentences and drawing them right into the heart of a strong, passionate character.  For a great quote, see my "Monday morsel" post from last week:   "... the restlessness was in my nature ...". 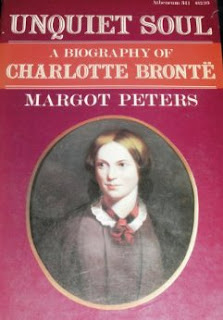 3.  In conjunction with Jane Eyre, I'm also re-reading Margot Peters' biography of Charlotte Bronte:  Unquiet Soul.  I love reading about the Bronte sisters, whose lives of reclusive obscurity belied the worldwide fame of their books -- and especially about how Charlotte's own life and personality informed her novels.  This book makes me want to read more biographies of the sisters.

The death of their mother was a deeply traumatic experience for the six young Bronte children.... It created in all the children an insecurity so severe that it can be said without exaggeration that all their lives not one of them was able to cope successfully with the world outside the parsonage walls.  At the same time, it drove them together; they clung to each other like tender vines, deriving all their comfort and strength from their intense emotional and physical unity.